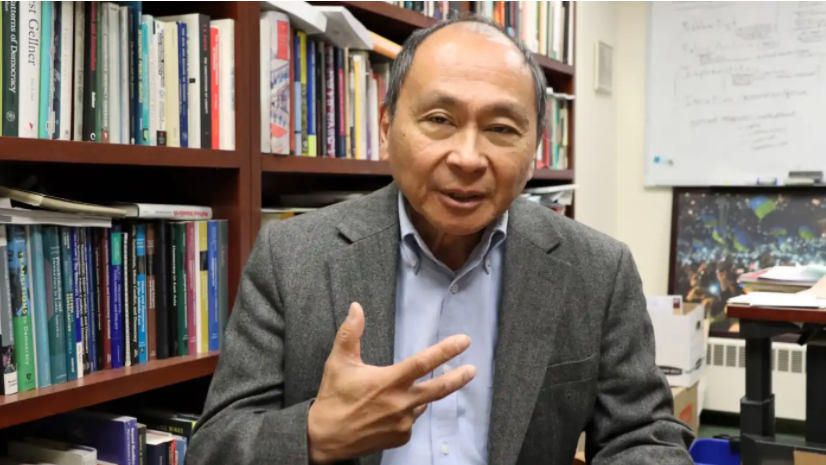 Francis Fukuyama says “there has been a lot of speculation that [Vladimir Putin has] kind of gone crazy,” isolated by the COVID epidemic.

WASHINGTON — Ukraine’s push for NATO membership did not prompt Russia to invade it, U.S. political scientist Francis Fukuyama told Nikkei in an interview, positing that Vladimir Putin’s motive was his intention to eradicate democracy from Eastern Europe.

It is essential for the world to realize this, he said, because Russia’s intentions are much larger than Ukraine.

Fukuyama — who argued in his 1992 classic “The End of History and the Last Man” that the collapse of the Soviet Union made Western-style liberal democracy the final champion — now notes authoritarian governments are ascendant and democracy’s momentum and spread are clearly over. He also says Russia is not as powerful as the former Soviet Union and, if there is another cold war, it will be more important to keep an eye on China.

He argues Putin’s decision was driven by resentment as well as by nostalgia for the former Soviet Union’s great power status. The author also believes it is possible Putin has made a huge mistake and will fail in his attempt to subdue Ukraine.

Despite authoritarians gaining momentum around the world, Fukuyama has not backtracked on his thesis that there can be no higher form of government than liberal democracy. To push back against authoritarian regimes like those ruling Russia and China, he believes liberal democracies will have to further their military deterrents.

Q: Can you give me your sense of the historical significance of Russia’s invasion of Ukraine?

A: I think it’s a very important event. The issue for Russia in Ukraine is not NATO membership. They have been using that as an excuse. Nobody has been serious about having Ukraine join NATO for the last 15 years. The real issue is Putin’s desire to reconstruct the former Soviet Union and to basically overturn the entire European security order that emerged after the breakup of the Soviet Union.

He’s made very clear that he doesn’t regard Ukraine as an independent country. The speech that he gave shortly before the invasion said that this was just the result of mistakes by communist officials and that Ukraine should never have been allowed to vote for its own independence.

The demands that they’ve made of NATO are basically to push back the entire democratization of Eastern Europe.

They want to forbid any military support to any of the NATO members, you know, Poland, the Czech Republic, the Baltic states. It’s really an effort to undo everything that’s happened since 1991. And that’s why I think we have to realize that this is a bigger issue than just Ukraine.

Q: Your “End of History” essay in 1989 was correct about the end of the Cold War. Are we now experiencing the beginning of a new history?

A: The spread of democracy that began with the fall of the Berlin Wall is clearly over. There’ve been gains with authoritarian governments all over the world for the last 16 years. And I think the threat is not just from places like Russia and China; it’s also within the United States, where we’ve seen the growth of a populist movement.

It’s quite revealing that former President [Donald] Trump actually praised Putin and seems to actually support the Russian side over the Ukrainian side, and this is something I actually never believed would be possible in the United States. So clearly, we’re living in a very different historical period.

There was a deeper question that I was trying to ask with “The End of History” about whether there’s a higher model of government than liberal democracy. I still think the answer to that is no, but right now we’re living in an age of democratic setback and weakness, and we have to push back against that.

Q: Is this the beginning of the second Cold War?

A: It depends on how you define the Cold War. I think that Russia, in the end, although it’s very strong locally, is not anything remotely as powerful as the former Soviet Union. Moreover, it doesn’t really have a doctrine or an ideology that it’s trying to promote.

I think, basically, it’s a regime that’s driven by resentment and a kind of nostalgia for the great power … that the former Soviet Union used to exercise. And I think it’s very possible that Putin has made a huge mistake in this invasion, that he’s bitten off more than he can chew and that he’s going to fail at his attempt to subdue Ukraine.

So, that would mean that this is not going to be anything like the Cold War, which lasted for a good 50 years. I just don’t think that Russia represents anything like … a great power. I do think that China is a more serious threat, in the long run.

Chinese power is much more multidimensional. The [Chinese] regime is much stronger in many ways than Russia, and so if there’s a cold war situation developing, I think that that’s really the country that’s more important to watch.

Q: Is there historical significance to the role President Putin is playing?

A: I don’t think that he represents a historical trend. I think that you have to explain a lot of his behavior in terms of personal psychology. There has been a lot of speculation that he’s kind of gone crazy during the COVID epidemic.

He’s been very isolated, he only talks to a very narrow circle of people.

It’s interesting … there are a lot of Russians that were pro-Moscow and they were pushing Moscow’s line, but they’ve been utterly shocked that Putin actually launched an invasion because they think it’s crazy, from the standpoint of Russian national interests.

Q: Do you think this will lead to a situation in which NATO will have to invoke Article Five — an attack on one member is deemed an attack on all — necessitating the U.S. to participate in a military conflict?

A: It’s a possible scenario. I would just like to point out that one of the things that’s happened over the past couple of weeks is that Russia has effectively reabsorbed Belarus. It had been an independent country, after 1991, but it’s effectively become part of Russia.

I think that, in terms of future threats, it’s really the Baltic states that are the most exposed because, just in military terms, NATO can’t defend the Baltics against a determined Russian attack. I think the situation … is a little bit like West Berlin during the Cold War. Back then, West Berlin was an outpost, completely surrounded by East Germany, that was not defensible against the Soviet Union.

What NATO did in that case was to station enough American and other troops in West Berlin so that if the Russians, if the Soviets, attacked it, they’d have to kill a lot of Americans in order to do that, and that would trigger a much bigger American response.

And I think that’s what the strategy is right now, in Estonia and Lithuania and Latvia, that NATO is trying to station troops from other parts of the alliance, especially American troops, in those places so that if the Russians move against [one of them], they will have to kill some Americans. And that, hopefully, will be a deterrent to a Russian attack.

The other place, I think, that you should be watching very carefully is the Black Sea because Ukraine is very dependent on being able to export grain from its Black Sea ports, and the Russians are trying to blockade that, which is basically an act of war.

Q: How do you think the sanctions by the U.S., EU and other countries will affect the Russian economy?

A: The Russian economy is going to take a big hit. Russian banks are no longer allowed to raise money in Western financial markets, and so they’re probably going to turn to China and to other sources. But it’s going to affect their economy.

They have over $600 billion in reserves, and so the short-term effect, I think, is going to be fairly limited. But quite honestly the major thing that people ought to be watching is the military conflict “on the ground,” and whether the Ukrainians can impose enough costs on the Russians to make this look like a military stalemate or a failure. That’s really what you need to look at.

Q: Do you think Russia’s invasion of Ukraine will prompt China to take tougher action in the Taiwan Strait?

A: It all depends on what the long-term outcome of this war is. I think that if Russia gets away with absorbing Ukraine, it happens fairly quickly and NATO and the U.S. can’t do very much to reverse that. And that’s not going to be good for Taiwan because I do think the Chinese will be watching that. On the other hand, if the Russians end up being bogged down, suffering a lot of casualties, suffer economically because of sanctions, then that’s going to probably give China a certain incentive to be more careful in what they do toward Taiwan.

Q: To what extent will China and Russia cooperate in the future against democratic regimes.

A: They are cooperating substantially right now because they have a common enemy, which is the U.S. and the larger community of democracies. However, their interests are not completely aligned. China has been struggling because it’s made respect for sovereignty such a big part of its foreign policy. And it’s a little bit hard for them to endorse the outright invasion of a sovereign neighbor.

In the case of Taiwan, they would say “That’s part of China. We’re not invading a sovereign country.” Although, in effect, I think it is. But you can’t make that kind of excuse in the case of Ukraine, which voted overwhelmingly to become an independent country.

Q: How can democratic regimes push back against and pressure authoritarian regimes such as those in China and Russia?

A: I think that we should have imposed much stiffer sanctions on Russia, [going] all the way back to 2014, when they took over Crimea and Donbas. But we had a fairly weak response at that time. The sorts of sanctions that are going in now probably should have been put there earlier.

I think, unfortunately, we’re going to have to reconsider strengthening our military forces. NATO had really not taken seriously the idea that it would be a fighting organization, until after 2014.

So there’s been an increase in joint exercises, stationing of forces, in countries that are directly threatened by Russia.

And I think more of that is going to have to be done. I think, in East Asia, there’s also a lot of military investments that need to be made because China’s military has been growing very, very rapidly. Its capabilities are much, much greater than they were five years ago.

I don’t want to have to spend more on the military than we do already, but I think that may be necessary.

Q: Do you think we can succeed in winning?

A: Well, I mean, there was a lot of disagreement and apparent weakness during the Cold War, but basically the Western coalition held together for two generations. So, I don’t see why that can’t happen another time.