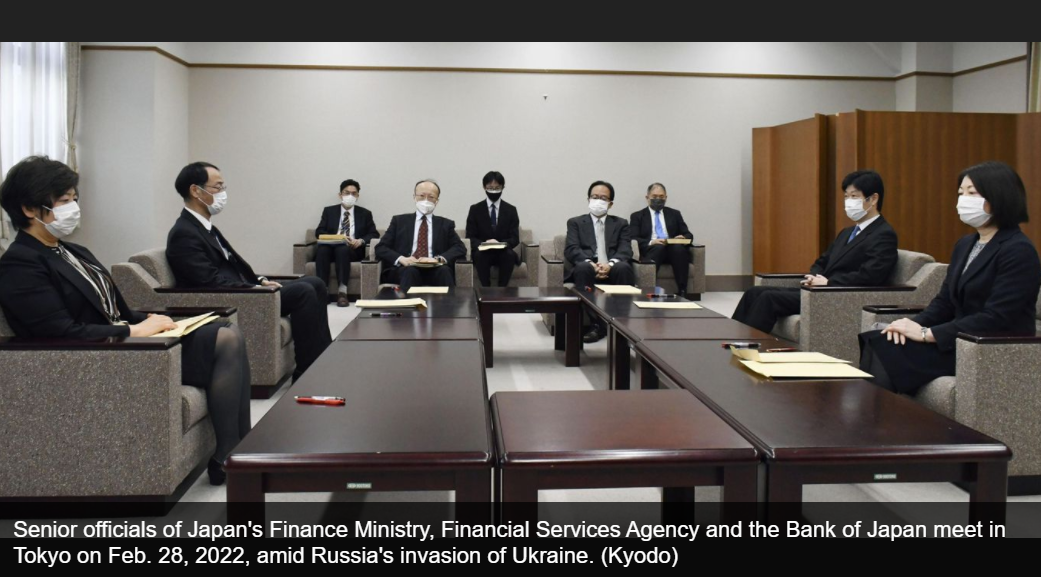 TOKYO — Japan will impose additional financial sanctions on Russia by limiting transactions with the Russian central bank, putting itself on a par with the United States and Europe in punishing Moscow for its invasion of Ukraine, Prime Minister Fumio Kishida said Monday.

The latest measure is the toughest yet to be imposed by Japan, which on Sunday backed efforts by other members of the Group of Seven industrialized nations in excluding some Russian banks from SWIFT, a key international payment system.

The restrictive measures by the major powers are aimed at disrupting Russia’s trade and preventing it from deploying its foreign reserves, which would deal a debilitating blow to the Russian economy.

The planned cut-off from the financial network already sent the Russian ruble tumbling and prompted the Russian central bank to raise interest rates to 20 percent from 9.5 percent to stem the currency’s freefall.

Earlier in the day, senior officials from the Japanese government and the Bank of Japan met to examine the impact of the Ukrainian crisis on financial markets and discuss crafting a financial sanction that would inflict painful consequences on Russia.

Masato Kanda, vice finance minister for international affairs, told reporters after the meeting that financial and monetary authorities “will work closely with the G-7 nations and the international community to exact maximum costs on Russia.”

“We are coordinating details of the sanction to make it effective,” he said after also holding talks with U.S. Deputy Treasury Secretary Wally Adeyemo earlier in the day.

Also on Monday, the U.S. Treasury Department banned transactions with the Russian central bank, the Finance Ministry and a Russian sovereign wealth fund in response to the country’s invasion of Ukraine.

The action effectively freezes any assets of the Central Bank of the Russian Federation held in the United States, the department said.

According to Kanda, the Finance Ministry, Financial Services Agency and BOJ are ready to address any possible impact the step may have on Japanese financial markets.

Many market participants have been worried that excluding Russia from international transactions could further push up commodity prices, including crude oil, which are already on an upward trend.

“There are layers of factors that could impact the overall economy and markets. So we confirmed close coordination among the authorities to ensure that all possible measures can be taken for markets,” he said.

“Right now, we have an instrument that is able to move quickly in the next few days if it’s needed and the circumstances go that way,” Malpass said in an interview with CBS, adding that the World Bank is working closely with the International Monetary Fund as well.