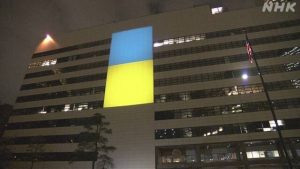 Mainichi reported online that in response to Russia’s invasion of Ukraine, the U.S. Embassy in Tokyo lit up the walls of its chancery building in blue and yellow, the colors of the Ukrainian flag, on Wednesday evening to show U.S. support for and solidarity with Ukraine. The paper wrote that Ambassador Emanuel initiated the idea of illuminating the Embassy building and invited Ukrainian Ambassador to Japan Sergiy Korsunsky to a lighting ceremony last night. The paper wrote that the Ambassador stressed at the ceremony that it is very important to show strong U.S. support for the Ukrainian people and that the United States strongly condemns the unprovoked, unjustified, and unwarranted war.

Ambassador Korsunsky expressed his appreciation for the support extended by the United States, Japan, and Europe and said that many Ukrainians, including children, are falling victim to Russia’s bombing of houses, schools, and hospitals at this moment and that the freedom and security of Europe will be determined by the Ukrainian people’s fight against Russia. The paper added that the U.S. Embassy will continue to be illuminated in the Ukrainian flag’s colors for the time being.

Yomiuri reported on the event on page 9 of its international news section, while NHK, NTV, Sankei, and Jiji Press posted similar reports online. NHK quoted Ambassador Emanuel as saying that because Prime Minister Kishida took the action to oppose the unjustified war, it is no longer just a European confrontation but is a global confrontation of democracies against autocracies. Jiji Press quoted the Ambassador as saying that the world is turning its back to Russia because Russia is turning its back to the world and that President Biden underscored U.S. solidarity with Ukraine during his State of the Union address on Tuesday.