Katsuji Nakazawa is a Tokyo-based senior staff writer and editorial writer at Nikkei. He spent seven years in China as a correspondent and later as China bureau chief. He was the 2014 recipient of the Vaughn-Ueda International Journalist prize.

For around a week in February, China’s top leadership disappeared from the news cycle.

As Chinese people basked in their Winter Olympic teams’ nine gold medal performances, the seven members of the Politburo Standing Committee were considering every angle of the then simmering Ukrainian situation and discussing how Beijing might respond.

They understood how the issue could affect their country, if they played it wrong.

Naturally, what was said is confidential and will never be disclosed. But there are whispers about the atmosphere of the discussions, and they are noteworthy.

“Collective leadership may be making a comeback due to the Ukraine issue,” a Chinese source said. Since becoming China’s top leader in 2012, Xi Jinping has been gradually dismantling a collective leadership system that was put in place by former leader Deng Xiaoping to prevent another one-man rule like under Mao Zedong.

It is safe to assume that a diversity of opinion remains among China’s top leaders over Ukraine. It is even likely that some standing committee members are questioning whether it is wise to stick to the current position of siding with Putin.

One such signal was a comment made by U.N. Ambassador Zhang Jun during the General Assembly’s emergency session that opened Monday to deal with Ukraine.

“The situation has evolved to a point which China does not wish to see,” Zhang told the session. “It is not in the interest of any party.”

His remarks went further than the official government line, albeit only slightly. He was likely reflecting objections within the top echelons of China’s communist regime.

When Putin a week ago began a full-scale invasion of Ukraine, concerns in China grew. The war was far more than the leadership had expected.

Chinese netizens were vocal. One said what Russia is doing in Ukraine is equivalent to what Japan did in the northeastern part of China (in 1932 Japan created the puppet state of Manchukuo). Russia’s invasion is hardly a development Chinese people can support.

And the chain of events made it look as if China was endorsing Putin’s actions. When the Russian president visited Beijing on Feb. 4, the opening day of the Olympics, Chinese President Xi Jinping joined him in objecting to any NATO expansion.

Russia then began its invasion after the Olympic flame was put out.

“Russia attacked another person’s house and then talked about ‘a peaceful settlement,'” another netizen wrote in disbelief.

So far, the Chinese government has been unwavering in its support of Putin. But that does not mean the seven standing committee members are in lockstep.

Beijing is now having to pay a steep price for its pro-Moscow stance, particularly for the side-by-side image it projected to the world on Feb. 4. China has secured a deal for more gas from Russia, but it will have to pay for the pipeline to bring it.    © AP

To be sure, China needed to show favor to Putin, the only leader of a major power to visit Beijing for The Games, and Xi needed the sports spectacle to be a resounding success as he looked ahead to the Chinese Communist Party’s national congress, this autumn.

And there was a view that the Ukraine matter could turn out to be a boon to China. As Putin ratcheted up tensions, some hawkish leaders thought China would stand to benefit if the U.S. and Russia collided in Europe. A result of this, the thinking went, would be the U.S. being less able to deploy power to the Asia-Pacific. China would then fill the void and neutralize America’s Indo-Pacific strategy of gathering like-minded allies and partners to prevent China’s military from forcing unification with Taiwan.

The mainstream view, at least among Chinese security officials, was that China would not lose in any case. Said one: “Russia and China will benefit from the Ukraine issue, while only Ukraine will lose. Western nations, too, could possibly suffer a serious blow.”

Now, however, concerns are growing that if China allows itself to be dragged in further to the “Putin theater,” its national interests will be undermined.

There was miscalculation on China’s part.

Xi’s brain trust thought that in the face of Russia’s overwhelmingly powerful forces Ukrainian President Volodymyr Zelenskyy would quickly flee. Further, they figured the Ukrainian military would surrender and that fighting would end within a few days.

China made such judgments based on intelligence from Russia. 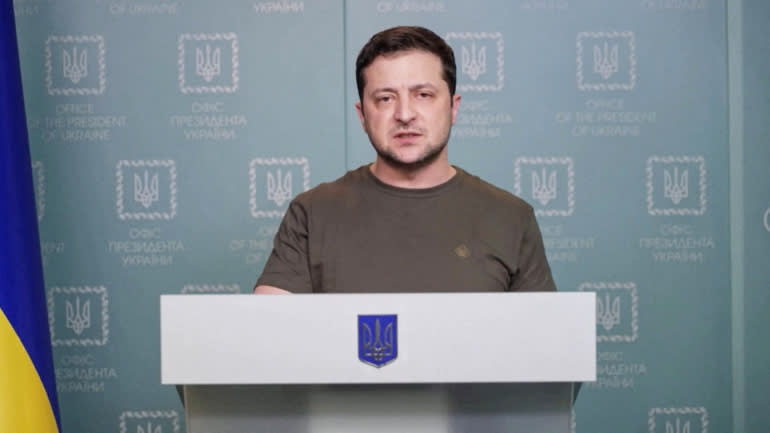 The leadership also believed the 6,000 or so Chinese living in Ukraine would be able to leave the country on chartered flights from airports under the full control of Russian forces. After a swift invasion, Russia would gain air supremacy, and an evacuation of Chinese nationals could be safely carried out by the end of February. Having made these judgments, the Chinese government did not dare to advise its nationals in Ukraine to leave the country.

This is a hidden reason why the Chinese government issued a notice asking Chinese nationals wishing to leave Ukraine to apply at the Chinese embassy by midnight on Feb. 27.

But an evacuation using chartered lights became unfeasible, and the Chinese embassy in Ukraine issued a notice informing Chinese nationals it would help them leave by land. Chinese students left Kyiv by bus.

Within days, the situation took a dramatic turn. Ukrainians refused to knuckle under and continue to give trained Russian soldiers a fight.

Many young Ukrainian men living overseas have returned home to take up the fight with their fellow countrymen. Their morale, along with that of Ukrainian troops, shows no sign of weakening.

These developments have put Xi’s leadership team on the unsympathetic side of the military invasion. Ukrainian service members look for and collect unexploded shells in the Ukrainian capital of Kyiv on  Feb. 26.   © AFP/Jiji

Is there a possibility that an embattled China will fundamentally change its stance? In this regard, the Politburo Standing Committee could play an important role. When the committee’s members are split over an issue, they settle the matter by a majority vote.

If it came down to a three vs. three tie, the last member would have the deciding vote that would set China’s policy.

That is the essence of a collective leadership, one that Xi has been trying to dismantle since coming to power.

But switching back to a collective leadership is not easy.

The biggest problem is that strengthening the Sino-Russo partnership is in line with Xi’s stance.

Xi prefers top-down decision-making in the name of “centralized and unified leadership.” If the standing committee were to vote to abandon a policy he advocates, it would essentially deal him a political defeat.

A foreign and security policy setback could deteriorate Xi’s power, making way for other policy changes in economic and other important matters. If such a scenario plays out, it would impact the domestic political battle taking shape in the lead-up to the party’s next national congress.

The Beijing Winter Paralympics open on Friday. What will Ukraine look like by then?