U.S. envoy to Japan sees world ‘turning away from Putin’ 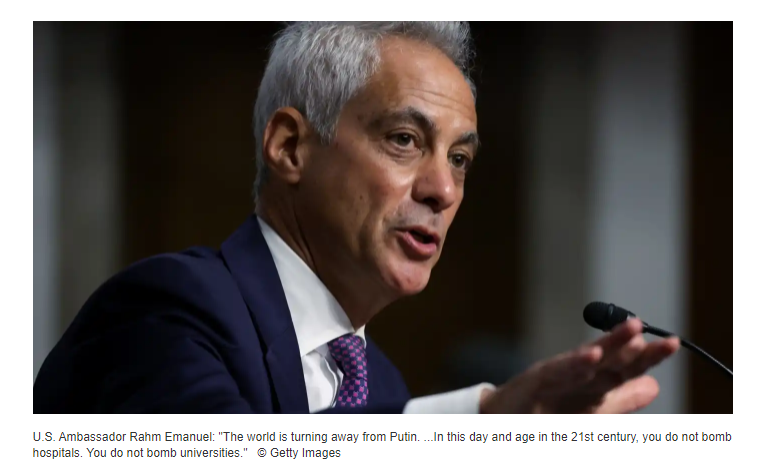 “Because of his actions, it is no longer just a European confrontation and standing up, but it’s a global confrontation of democracies against autocracies,” said Emanuel.

When asked whether Japan should also close its airspace to Russian planes just as U.S. President Joe Biden announced his country would do on Tuesday night, Emanuel said: “It’s not for me, obviously, to speak for the Japanese government. …You saw what the president of the United States did. You saw what Europe did. And you saw what Canada did. And I think that sets a precedent.”

He also stressed global opposition to the invasion, noting that “[T]he world is turning away from Putin … because they’ve turned their back on what we all agreed to and agreed upon. In this day and age in the 21st century, you do not bomb hospitals. You do not bomb universities.”

“The war is going to affect far beyond the borders of Eurasia,” Korsunsky told reporters at the U.S. embassy. “It is very important for us that Japan stands together with America, with Canada, with Great Britain, with the European Union. Together, we must feel that it is not just about Europe.”

Hayashi was evasive when he was asked at a separate news conference if Japan intends to impose sanctions on Russian airlines. “To date, decisions have been made based on a comprehensive assessment of the appropriate measures to be taken,” he said.

Ukrainian and Russian delegations met for the first time on Monday since the war broke out in Belarus. Sanctions have caused the ruble to tumble to record lows, and major companies including Apple, Boeing, Shell and Exxon Mobil have announced their exits from Russia.

Korsunsky expressed confidence that the war would end soon as sanctions start to bite.

“Each day, they’re losing hundreds of billions of dollars. That’s the price of this adventure,” said Korsunsky. “We hope they will feel the heat and the second round [of negotiations] may bring a kind of ceasefire and maybe a permanent solution.”

Note: This is a revised version of a previous story. The U.S. ambassador’s comments have been added and the headlines changed.