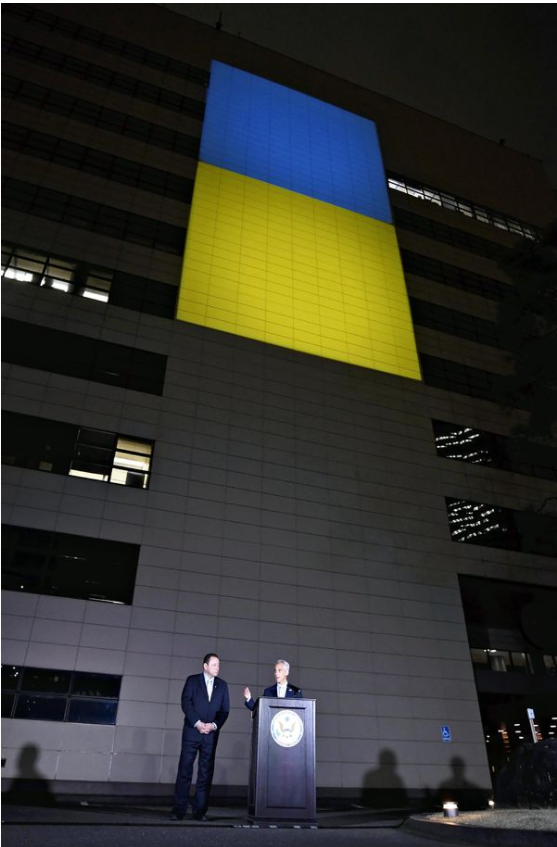 The Yomiuri Shimbun / U.S. Ambassador Rahm Emanuel speaks alongside Ukrainian Ambassador Sergiy Korsunsky in front of the U.S. Embassy, illuminated in the colors of Ukraine’s flag, in Tokyo on Wednesday.

The U.S. Embassy in Tokyo was lit up in the blue and yellow to evoke the Ukrainian flag on Wednesday evening, in a show of support for and solidarity with Ukraine.

“It is important for us to show strong U.S. support for the Ukrainian people at this hour,” Emanuel said.

“[Russian] President [Vladimir] Putin is more isolated than he has ever been because of his own actions,” he said, adding that “the world is turning away from Russia because Russia turned its back on the world.”

Emanuel then praised Japan for imposing economic sanctions against Russia.

“I would like to extend my sincere thanks to Prime Minister [Fumio] Kishida for Japan’s outstanding leadership in supporting Ukraine and standing up to Russia,” the U.S. ambassador said.

Korsunsky said the war will affect not only Europe, but also extend to the Eurasian continent.

With regard to Ukraine-Russia talks to end the fighting, Korsunsky stressed that the situation can be resolved only by the withdrawal of Russian troops and by giving control of Crimea and eastern parts of his country back to Ukraine.