JAKARTA — In the wake of Russia’s invasion of Ukraine, the 10 member states of the Association of Southeast Asian Nations, are nervous about the implications for the South China Sea dispute.

As Russia’s unilateral attempt to change the status quo overlaps with China’s aggressive moves in the South China Sea, they fear that if Russia’s actions are tolerated, there could be spillovers in their neighborhood.

“What’s happening in Ukraine now is impt. to us. If international relations are based on ‘might is right,’ the world will be dangerous for small countries. This is why SG [Singapore] staunchly supports international law & the UN Charter,” Prime Minister Lee Hsien Loong said in a Twitter post on Monday.

Cambodian Prime Minister Hun Sen and his Malaysian counterpart, Ismail Sabri Yaakob, exchanged views on the situation in Ukraine during their talks in Phnom Penh on Feb. 24.

“Although we are far away, and a small country, international issues such as this are very concerning to us,” Hun Sen was quoted as telling reporters with the Straits Times, an English-language newspaper in Singapore. Activists stage a protest over China’s behavior in the South China Sea, in Makati City, Philippines, in July 2021.   © Reuters

ASEAN members are no match for nuclear powers in terms of military strength. If a military power like Russia attempts to expand its territory or territorial waters in defiance of international law, it would be difficult for any one of them to cope alone.

In a statement released Sunday, ASEAN foreign ministers said they “are deeply concerned over the evolving situation and armed hostilities in Ukraine,” and called for “all relevant parties to exercise maximum restraint,” without blaming Russia explicitly. When Russia seized Crimea from Ukraine in 2014, ASEAN issued no statement.

The U.N. General Assembly on Wednesday overwhelmingly adopted a resolution that “deplores in the strongest terms” Russia’s “aggression” toward Ukraine. Among ASEAN’s 10 members, eight voted for the resolution, with Vietnam and Laos abstaining. 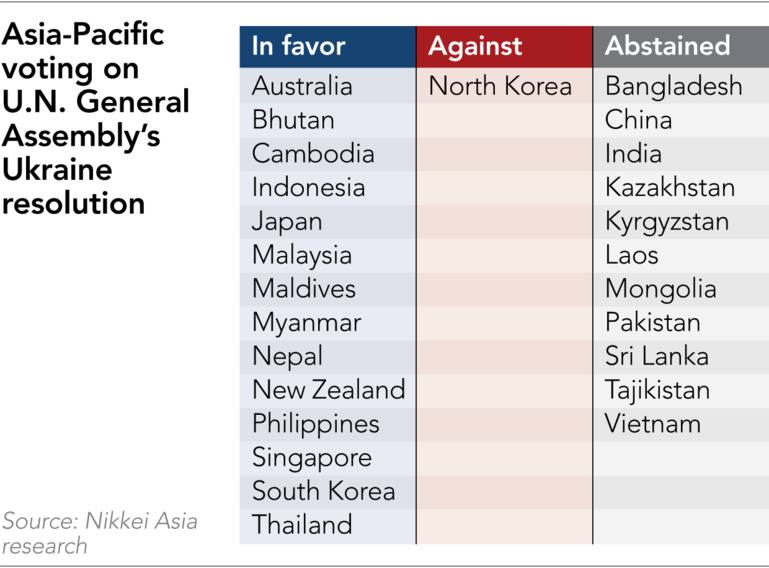 For ASEAN, experts say Russia’s invasion of Ukraine has parallels to China’s expansionist moves in the South China Sea, which they also see as a giant neighbor’s unilateral attempt to change the status quo.

“There is [a] concern that if the U.S. is occupied with the conflict in Europe, China might fill the vacuum in Asia by either invading Taiwan or solidifying its presence in the South and East China Sea,” Gilang Kembara, a researcher at Centre for Strategic and International Studies Indonesia, wrote in a Jakarta Post op-ed.

In 2016, an international tribunal set up under the auspices of The Hague-based Permanent Court of Arbitration handed down a ruling rejecting China’s territorial claims in the South China Sea, in a case brought by the Philippines.

China ignored the court’s decision, calling it “waste paper,” and has since continued to press ahead with the militarization of the South China Sea. 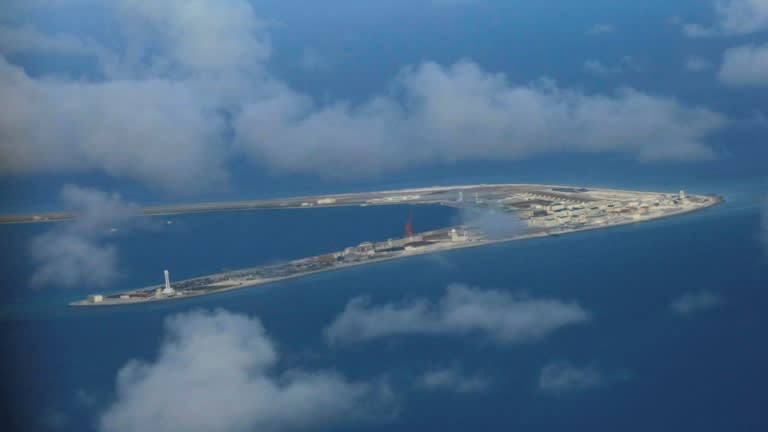 An aerial view of Chinese-occupied Subi Reef in the Spratly Islands in the South China Sea: Beijing has territorial disputes with a number of countries in Southeast Asia over islands in the area.   © Reuters

According to the Indonesian Coast Guard, it has been on high alert in waters around the country’s Natuna Islands since before Russia’s invasion of Ukraine.

That is because Indonesia’s 200-nautical-mile exclusive economic zone around the islands overlaps with the “nine-dash line” claimed by China as its own border in the South China Sea, pitting the two countries against each other.

Regarding the Ukraine crisis, a Vietnamese Foreign Ministry spokesperson also called for the observation of international law and urged parties concerned to make diplomatic efforts.

Vietnam’s ruling Communist Party, has had deep relations with Russia since the Soviet era. It is unusual for Vietnam to publicly refer to international matters involving Russia. Because Vietnam is locked in a territorial dispute with China in the South China Sea, the Southeast Asian country may have spoken out, alarmed the Ukraine crisis may spill over into its region. A senior ASEAN diplomatic source pointed out similarities between now and 2014, when Russia annexed Crimea. At the time, U.S. President Barack Obama could not stop Crimea’s takeover by Russia, and his Democratic Party lost in midterm elections a few months later. As a result, the Obama administration was weakened politically, while China stepped up its activities in the South China Sea.

Similarly, if the Biden administration cannot halt Russia’s invasion of Ukraine, some pundits say the Democratic Party will face an uphill battle in this autumn’s midterm elections, and China could further cement its control in disputed waters.

The White House announced on Feb. 28 that President Biden will hold a special summit meeting with ASEAN leaders in Washington on March 28 and 29. Although dealing with China will be high on the agenda, Biden is also expected to take up the Ukrainian situation and call for cooperation from ASEAN leaders.

Japanese Foreign Minister Yoshimasa Hayashi also held talks on Monday with the ASEAN ambassadors in Japan and affirmed the close cooperation between the two sides to cope with common challenges, including Russia’s invasion of Ukraine.