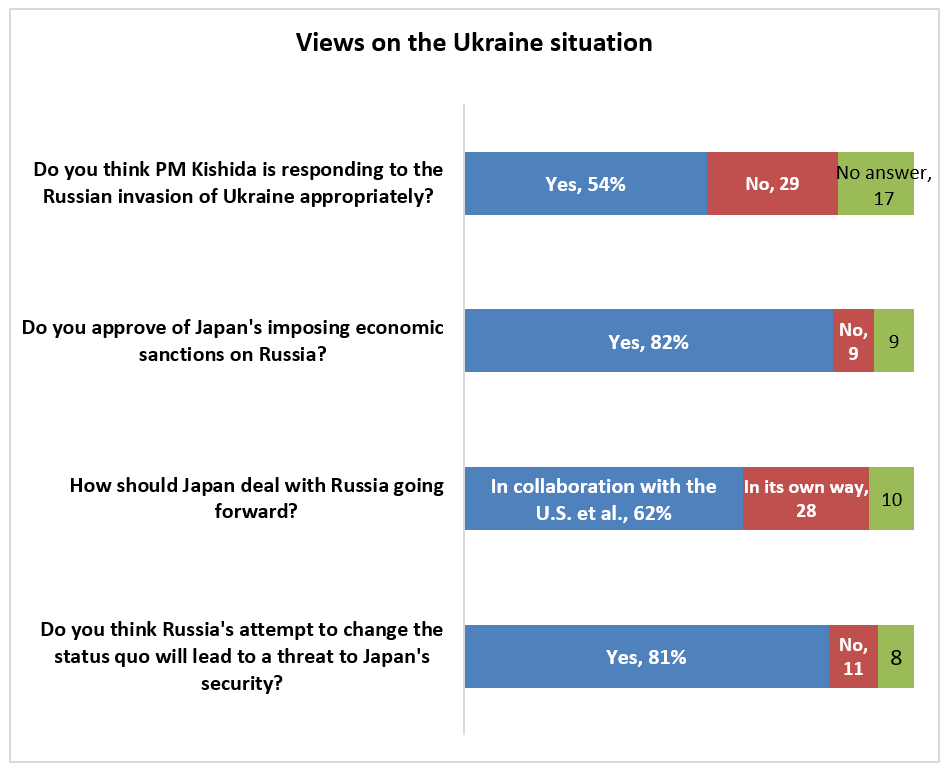 Economic sanctions against Russia over its invasion of Ukraine that the Japanese government has been strengthening were supported by 82% of the people, according to a nationwide poll.

Only 9% of people did not support the sanctions, with 9% not answering the questions, in the nationwide telephone poll conducted by The Yomiuri Shimbun from Friday through Sunday.

The vast majority of eligible voters seem to be calling on the government to deal with Russia stringently. Whether by gender, age or political party support, about 8 out of every 10 people support the sanctions, which are being imposed in cooperation with nations like the United States.

When asked whether Japan should deal with Russia in such concerted efforts with like-minded countries in the days ahead, 62% of people agreed, while 28% said Japan should respond in its own way.

Regarding threats to Japan’s security, 81% of people thought Russia’s attempt to unilaterally change the status quo by force would affect other regions, such as encouraging China to use armed force against Taiwan. Only 11% said they did not think so.

As people’s sense of alarm runs strong that China might also venture to change the status quo by force, this might likely affect discussions over the reinforcement of Japan’s defense capabilities.

A majority of people, 54%, said they thought Prime Minister Fumio Kishida was responding appropriately to the issues related to Ukraine, while 29% didn’t think so.

As for the novel coronavirus, 54% of people approved of the government’s handling of the pandemic, up six percentage points from the previous poll conducted Feb. 4 to 6, while 37% disapproved, down from 44%.

The central government decided to extend through March 21 quasi-emergency measures for Tokyo, Osaka, and 16 other prefectures, and 68% of people approved the move, while 26% didn’t.

The poll used the random digit dialing method and received valid responses from 1,063 people ages 18 and over who are eligible voters.