TOKYO — Russia recently started building a shelter for submarines on the Kamchatka Peninsula in its remote Far East, fanning concerns it aims to use the Northern Sea Route, a shipping lane that connects Asia and Europe via the Arctic, for more than purely economic purposes.

The shelter, located near Petropavlovsk-Kamchatsky, the largest city in the Kamchatka Peninsula and a key base for the Russian Pacific Fleet, will be supply submarines with missiles, torpedoes and fuel, according to Russia’s Izvestia daily newspaper, as well as hosting full-scale repair and maintenance work. State-of-the-art minesweepers will also use the site.

A submarine base near Petropavlovsk-Kamchatsky is home to most of Russia’s Pacific missile submarine fleet. Since Vladivostok, where the Pacific Fleet is headquartered, faces the Sea of Japan, submarines operating from the port are vulnerable to monitoring by enemies. But subs based in the city on the east coast of the Kamchatka Peninsula are less likely to be detected.

This area, however, has one big strategic disadvantage: It is not connected to the rest of Russia by land transport routes. All supplies have to be carried to the city by air or by sea, which are naturally susceptible to bad weather. Moreover, electricity is costly and supply is unstable in the area, which mainly depends on power generated by diesel. In a nutshell, the region is plagued by logistical challenges.

But, if the melting of ice as the planet warms paves the way to the year-round use of the Arctic shortcut between Europe and Asia, that could reshape the way things move between the two regions. 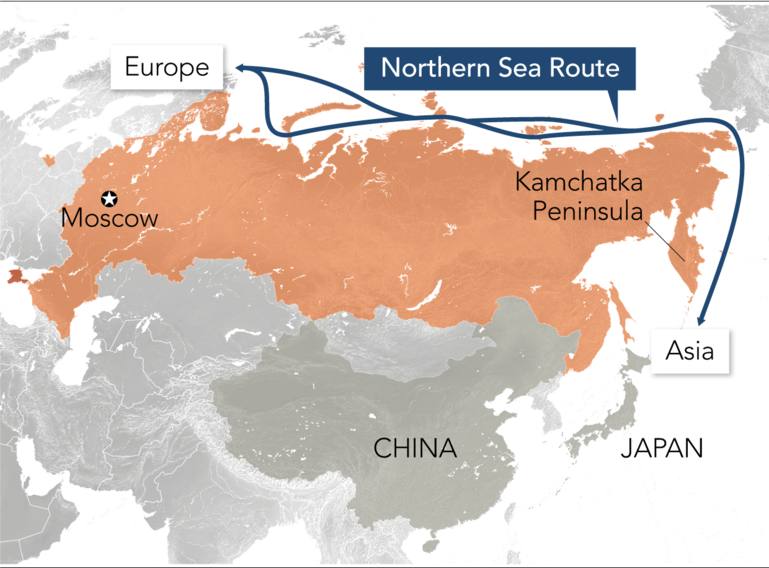 Russian President Vladimir Putin appears to see this as more than simply a new strategic opportunity for unlocking and monetizing Russia’s vast oil and gas reserves in the Arctic.

The Kremlin believes gas is a solution to the challenges and the key to the military development of the region. The Putin administration has announced plans to use LNG to supply power to the entire area.

Bechevinskaya Bay in the Kamchatka Peninsula is now attracting a wave of international attention as a major Russian energy company has decided to build a liquefied natural gas transshipment terminal there. The total cost of the LNG project is estimated at $1.28 billion. Construction equipment and facilities for the project started being carried into the bay last November. A base near Petropavlovsk-Kamchatsky in the Kamchatka Peninsula is home to most of Russia’s Pacific missile submarine fleet.   © AP

The terminal will be used for exporting LNG produced in the Gydan and Yamal peninsulas in the Russian Arctic, transported through the Northern Sea Route. The gas will be shipped to key regional markets such as Japan and China. Ice-breaking LNG carriers currently used for the Arctic shipping lane will be replaced by non-icebreaking LNG tankers.

Russia is developing the Northern Sea Route and LNG projects in areas along the sea lane for both economic and military purposes. But the strategic and military importance of the efforts has grown markedly since the conflict in Ukraine started in 2014. The Putin administration, which sees the Arctic as the front line in defense against the U.S., has been steadily expanding the military functions of the region.

Airports and other military facilities have been built in areas and islands along the Northern Sea Route, including Sredny Island, along with Tiksi and Wrangel Island, which is close to Alaska. In Pevek, an Arctic port town in northeastern Siberia, the world’s first floating nuclear power plant, developed by Russia in 2019, has started operations. Gas wells at the Bovanenkovo gas field owned by Gazprom on the Arctic Yamal Peninsula in Russia.   © Reuters

The U.S. has been openly bothered by these developments in the Arctic. A report published by the U.S. Navy in 2021 criticized Russia for opaque military activities and attempts to restrict free navigation in the Arctic Ocean, an open sea.

Japan also has strategic interests in the region. In 2019, the Japan Bank for International Cooperation (JBIC), Mitsui O.S.K. Lines and a Russian natural gas producer signed a cooperation agreement for an LNG transshipment project in Kamchatka.

Also in 2019, Mitsui, a major Japanese trading company, and others acquired a stake in a project to build and operate an LNG plant on the Gydan Peninsula. Nearly 80% of the LNG produced at the plant will be exported to Asian markets through the eastbound Northern Sea Route all year round.

Japan has a clear interest in diversifying its energy suppliers. Japanese investments in Russian LNG projects have paid off in the rise of Russia’s share in Japanese LNG imports to about 10%. But there is a growing risk that these projects could be used for military purposes without the knowledge of Japanese investors.

JBIC President Masafumi Maeda said at a news conference earlier this month that the bank is reviewing its financing of projects in Russia in the wake of the country’s invasion of Ukraine.

China is also showing a strong interest in expanding its presence in the Arctic. Obtaining a new shipping route in the region would be a boon to Beijing, which is locked in a bitter battle with the U.S. for global dominance. China has become the largest foreign investor in Russia’s Arctic development and LNG projects. A Chinese company has been chosen as the main contractor for the LNG transshipping complex in Bechevinskaya Bay.

Shoichi Ito, a manager and senior researcher at the Institute of Energy Economics, Japan, had said before Russia’s invasion of Ukraine that Japan’s involvement is driving closer energy cooperation between China and Russia. Both countries welcome Japanese investment, which also helps them avoid becoming too interdependent. In addition, Japan’s involvement also helps them dodge criticism from the U.S. and Europe by allowing them to make such projects look beneficial to the West as well.

A complicated matrix equation with many variables determines the value of Arctic energy projects. Russia’s invasion of Ukraine has only made the equation even more complex. It is probably time for Japan to reassess the wisdom of investing in the strategically sensitive region.