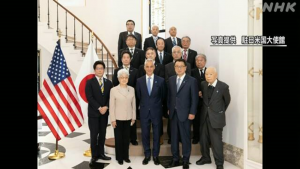 TBS and TV Asahi reported that Ambassador Emanuel held a meeting with 12 representatives of the families of nine Japanese citizens abducted by North Korea at the Ambassador’s Residence in Tokyo on Monday morning. The event was arranged by Ambassador Emanuel, who reportedly said to the families: “Each abduction case is different and each story is extremely painful to hear.” Yokota Takuya, the younger brother of Megumi Yokota, said on camera after the session: “We were encouraged to hear him saying that the United States will never forget about this issue and will make efforts until it is resolved.” Yokota reportedly conveyed to the Ambassador the group’s desire to meet with President Biden when he visits Japan based on the belief that such a meeting in and of itself would send a strong message to the DPRK. NHK ran a similar story online.