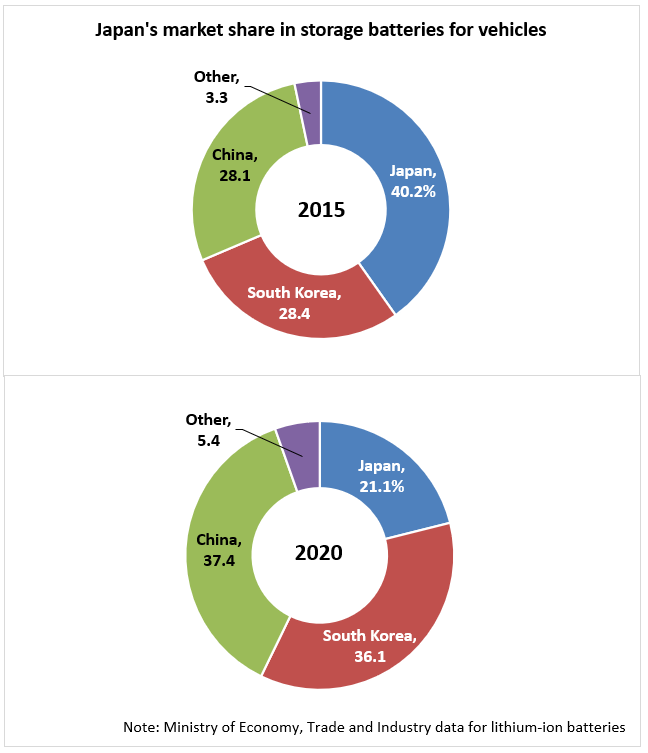 The government has begun to consider setting storage battery production targets for Japanese companies for around the year 2030, the Mainichi Shimbun has learned. Storage batteries are indispensable for increasing the use of electric vehicles (EVs) and renewable energy. The government also plans to enhance support for securing the metal resources needed to manufacture the batteries and to raise the ceiling on government financing for mining development projects. This will raise the nation’s industrial competitiveness with a carbon-free society on the horizon.

In recent years, Chinese and South Korean manufacturers have stepped up their production, and Japan has gradually lost its dominant position in the market. This spring, the government will compile a national strategy that includes support for storage-battery manufacturing, with the aim of regaining the nation’s superior position in the field.

The government has already set a goal of increasing domestic production capacity to 100 gigawatt hours by 2030 for storage batteries installed in EVs and the like, and it will add production at overseas factories to that figure. “Stationary batteries,” which store electricity generated by solar power and other renewable energy sources, are becoming more important and are expected to be included in the target.

Demand for metal resources such as lithium and nickel is expected to increase sharply as the storage-battery market expands. Russia produces much of the world’s nickel, and many are concerned about supply due to the tense situation in Ukraine.

As Japanese companies move to diversify their suppliers, the government will support them in gaining an interest in overseas development projects by making it possible for Japan Oil, Gas and Metals National Corporation (JOGMEC), a government-affiliated organization, to provide over half of the investment amount.