Burns, a former U.S. ambassador to Moscow, described how the invasion of Ukraine was not going as Russian President Vladimir Putin had envisioned. The CIA director said Putin had gone to war against Ukraine based on four incorrect assumptions.

Putin first assumed that Ukraine was weak. He also anticipated that Europeans would be risk averse, with France distracted by its upcoming presidential election and Germany coming off a leadership succession. Third, Putin believed he had inoculated his economy against international sanctions.

Finally, the Russian leader was confident he had modernized his military and that it was capable of a quick, decisive victory at minimal cost. “He’s been proven wrong on every count,” Burns said.

Russia’s nearly three-week-old war against Ukraine, which the Kremlin calls a “special operation,” has transformed the world politically and economically.

Western countries have come together in surprising fashion, imposing economic and financial sanctions regardless of the damage to themselves. Contrary to Putin’s game plan, NATO has become tighter, not looser, as an alliance.

But does this mean that Washington is in a better position as the world’s leader? Some analysts argue that while the alliance is stronger, the U.S. itself is weaker, especially because President Joe Biden was unable to stop Putin from invading Ukraine.

And what lessons have Chinese leaders taken from watching Russia as they ponder a potential future unification with Taiwan by force? 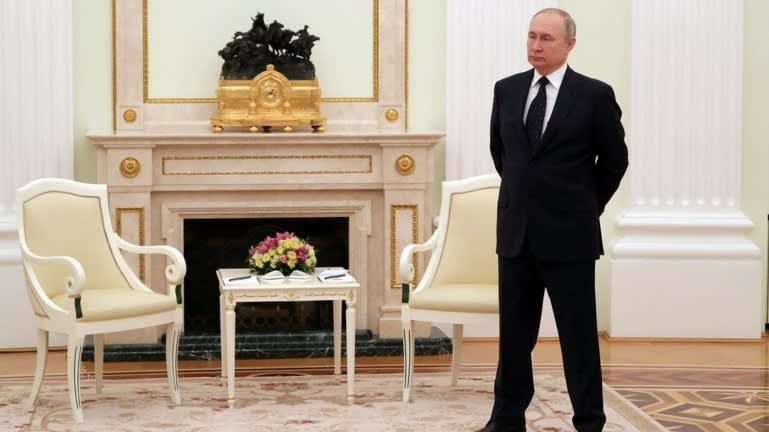 Russian President Vladimir Putin stands in the Kremlin in Moscow on March 11. U.S. intelligence believes he has miscalculated the developments in Ukraine. (Kremlin via Reuters)

Kenneth Weinstein, a distinguished fellow at the Hudson Institute, a conservative foreign policy think tank, slammed Biden for sending “signs of American weakness” to Putin before the invasion. He took issue with the decision to dispatch Burns, the CIA director, to Moscow in a bid to ease tensions prior to the war.

Burns “is liked in Moscow because he’s considered less ideological and he was not in favor of NATO expansion,” Weinstein said. The visit “was taken as a huge sign of American weakness.”

“Then the president’s decision … to immediately say that we would not be sending armed forces into Ukraine — Americans into combat in Ukraine — was a concession that didn’t need to be taken off the table, whether we’re going to do it or not,” Weinstein said.

Historian Niall Ferguson, a senior fellow of the conservative Hoover Institution at Stanford University, agreed it was too clear that the Biden administration did not want to go into a war.

“The other side knows that Biden and [Secretary of State Antony] Blinken and [national security adviser Jake] Sullivan don’t want to get into a war,” he said. “They are primarily interested in domestic policies. They do not want to make the mistakes, as they see it, of [President] George W. Bush.”

Ferguson suggested that this would not have been the case under former President Donald Trump.

“Trump came to personify Richard Nixon’s ‘madman’ theory, that if the world thinks the U.S. president is crazy, they are careful,” he said. “In Trump’s case, the Chinese and the Russians really did have to consider the possibility that he was crazy, because of the erratic way in which Trump behaves, the language he used.

“The Biden administration has been very intelligent, very steady, very thoughtful,” he said, in gently rebuilding U.S. alliances after the trauma of the Trump administration.

Niblett commended the Biden administration for sharing intelligence and consulting with allies beforehand.

“So when the crisis actually happened, they already had the full scale of options,” he said. “They didn’t have to fight over ‘this much, that much, what’s the level,’ you know?”

The U.S. saw an opportunity to prove that alliances are essential for American security, Niblett said.

“As Putin raised the pressure on Ukraine, he gave them the opportunity — that they had not had before — to prove that their strategy was correct,” he said. Members of the Chinese delegation led by President Xi Jinping attend a meeting with Russian President Vladimir Putin in Beijing on Feb. 4/ (Kremlin via Reuters)

Meanwhile, many analysts agree that Beijing misread the developments, leaving China in the awkward position of having to justify its support for Putin. Instead of simulating whether a similar scenario is possible for Taiwan, Beijing might conclude that the risks are just too high.

Daniel Russel, former U.S. assistant secretary of state for East Asian and Pacific affairs, cited the Feb. 4 summit between Putin and Chinese President Xi Jinping in Beijing on the opening day of the Winter Olympics.

“There’s a lot of debate about how much Putin may have told Xi in their meeting and how much Xi really understood what was about to come next,” said Russel, who now serves as vice president for international security and diplomacy at the Asia Society Policy Institute.

“We can all see that China was caught badly off guard by the suddenness of the Russian invasion,” he said. “The leadership in Beijing was startled at how fierce Ukraine’s resistance was, how unified NATO and the West were, how terrible the images were of civilian casualties.”

While official Chinese sources initially repeated Russian talking points and refused to condemn the actions, “that started to change within a few days,” Russel said.

“The Chinese quickly realized: number one, that the invasion was going very poorly,” he said. “Number two, that in the eyes of the international community, it was really a terrible liability that Putin and Russia were being isolated and ostracized, and China didn’t want to be tarred with that same brush.

“China is now trying to have it both ways,” he said. “They want to maintain alignment with Russia for strategic reasons, but they also want to minimize the risk to China from the West and the Western reaction. What they’re doing isn’t really peacemaking, it’s image making.”

“It’s hard to believe that there’s anything that the Chinese have seen in Russia’s military operation that they find encouraging,” he said.

Just as Russia’s actions unified NATO, the Ukraine crisis likely will bolster unity, coordination and cooperation among Asian actors, Russel said. These include the nations of the Quad security framework — consisting of the U.S., Japan, India and Australia — as well as countries such as South Korea, Singapore, Vietnam, the Philippines, Thailand and Indonesia.

“That is clearly the opposite of what China wants,” he said. Japan’s Prime Minister Fumio Kishida speaks during a news conference at the prime minister’s official residence in Tokyo on Feb. 25.

Joshua Walker, president and CEO of the New York-based Japan Society, was surprised by the fast response from Japanese Prime Minister Fumio Kishida’s administration to side with the West in opposing Russia’s actions.

“I would have expected that with a new prime minister that is very anti-military force, very pacifist in nature, that he might have tried to be a little more neutral,” Walker said. “Russia would have liked Japan to have been like China and stayed out of it. But that’s not possible for Japan with the U.S.-Japan alliance, and also given the importance of the principle of democracy and the free and open” Indo-Pacific region.

But Walker also noted that the Ukraine invasion exposed the limits of the Quad.

“The Quad is a really interesting point because India is so strident in being nonaligned it’s becoming a real problem. Australia, Japan and the U.S. are on the same page on Russia. India’s by itself, it’s with China,” he said. “It’s very clear that India is the problem, not Japan.”

India’s stance, in the short term, may stem from a desire to avoid burning bridges with Russia, from where New Delhi buys much of its arms. But in the long term, the stance may reflect a difference in how Japan and India see the future prospects of the U.S.