TOKYO — Japan and South Korea are scrambling for alternatives to space launch services from Russia’s Soyuz as Asia deals with the fallout from Russia’s invasion of Ukraine.

Satellite operators are trying to wean themselves off the inexpensive Russian launch services they have long relied on. With economic sanctions in place against Russia, including a ban on cross-border payments, and potential reputational damage, doing business with Russia has become too risky for them. India and China, meanwhile, are trying to maintain a low profile on their space cooperation with Russia.

Synspective, a Tokyo-based satellite constellation operator, was scheduled to launch a radar satellite on a Soyuz rocket around September but the plan is now in doubt. A company spokesman stresses that Synspective has two more launch vehicles secured under an existing contract with U.S. launch provider Rocket Lab, indicating that the Japanese company can switch if needs to. The Tokyo-based startup launched two satellites on Rocket Lab’s Electron rockets earlier this month and in December 2021.

To space startups like Synspective, major project delays are anathema because they need to build a track record to retain investors.

Another satellite constellation operator, Tokyo-based Axelspace, had planned to send four optical imaging satellites on a Soyuz rocket in the fourth quarter of this year. “We are closely monitoring the current situation and considering all possibilities,” Axelspace said in a statement.

“Japanese satellite operators will look at other options outside Russia for their satellite launches,” predicted Shigeki Kuzuoka, who runs a space consultancy and heads Euroconsult’s Japan office. Some may even consider using Chinese commercial launch services, he said, noting that Chinese companies have been keen to establish a foothold in Japan. 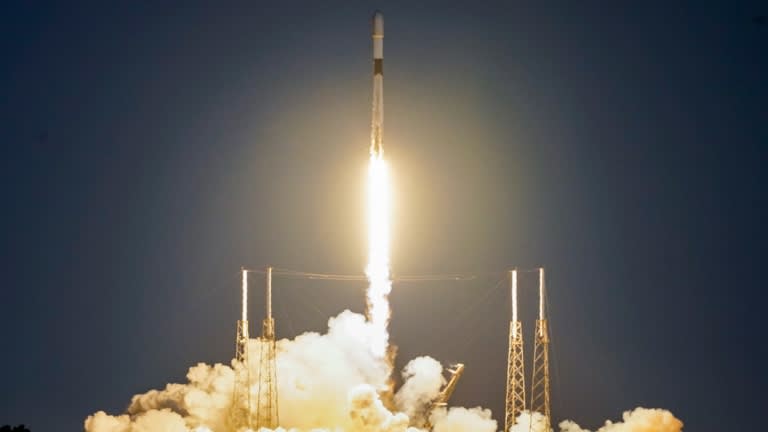 South Korea faces similar challenges. Its Arirang 6 multipurpose satellite was scheduled to launch from Russia in the latter half of the year, but it is now unclear whether international sanctions against Russia will allow the project to proceed.

The Korea Aerospace Research Institute, the space agency of South Korea, said it can cancel the contract in the worst case and find alternatives such as SpaceX in the U.S. and Arianespace in Europe. “It’s hard to predict at the moment. We are paying close attention to the developments in Russia,” said a KARI spokesman.

Moscow is using its clout in the space industry to hit back against Western economic sanctions. Roscosmos has blocked the U.K.’s OneWeb from using its Soyuz rockets to launch satellites. The Russian space agency also withdrew from a joint commercial launch service it operated with France’s Arianespace.

Roscosmos chief Dmitry Rogozin has threatened to halt cooperation in the operation of the International Space Station, prompting concern in Japan about various science projects planned on the Earth-orbiting laboratory.

Soyuz provided a cheap and reliable launch option for Japan. Billionaire Yusaku Maezawa became the first Japanese private citizen to visit the International Space Station aboard a Soyuz rocket in December, a trip arranged by Virginia-based travel agency Space Adventures. On Feb. 27, Maezawa tweeted that he has “mixed feelings” about having traveled aboard the Soyuz following the Russian invasion. Soyuz’s isolation comes at an inconvenient time. Japan’s main launch vehicle, Mitsubishi Heavy Industries’ H2A, is being phased out and replaced by the new, more powerful H3. The new vehicle is designed for more frequent launches, six to 12 times a year, up from the current three or so. But in January, the Japan Aerospace Exploration Agency (JAXA) announced H3’s maiden flight will be delayed beyond March.

Mitsubishi Heavy acknowledges that it is receiving inquiries from satellite operators such as OneWeb about getting help with launches, but declined to say how it intends to respond.

The H3 is being developed by JAXA. “We are doing everything we can to pull off the first launch as soon as possible,” said Akitaka Kishi, a JAXA spokesperson. Under the original plan, the H3 was supposed to go into service in 2020 and fully replace the H2A by 2025.

“We want to be able to meet demand, but cannot sacrifice rocket reliability for that,” he added.

Kishi also said that launch plans must be decided through talks with government agencies, and that it is unclear how long Soyuz will remain unavailable.

“Japan has been working on retaining autonomous space access as a top policy priority since 2010,” pointed out Hiroaki Akiyama, a professor at Wakayama University, who has served on government space policy panels. “There may be problems in the short term, but in the long term, Japan should be able to live without Russian launch services.” The H3 is being developed by Japan Aerospace Exploration Agency. (Photo courtesy of JAXA)

China has remained silent about the future of its space cooperation with Russia.

The two countries said last year that they will jointly develop a lunar station by 2035. The mooted project is a riposte to the Artemis program, a U.S.-led initiative for lunar exploration, which the Chinese media has derided as a “space-based NATO.”

India and Russia have been cooperating for decades on the peaceful uses of outer space, including satellite launches, the GLONASS navigation system, and remote sensing. Russia is also supporting India’s maiden human space mission, Gaganyaan, which is expected to launch in 2023. Four Indian astronauts shortlisted for the mission completed their training in Russia in March last year.

An agreement to deepen bilateral space cooperation was also signed during Russian President Vladimir Putin’s visit to India in December for an annual summit with Prime Minister Narendra Modi.

Given its long-standing defense and strategic ties with Russia, India has refrained from outright condemnation of Moscow over its invasion of Ukraine. It has also abstained from key United Nations votes on the crisis, calling instead for an immediate cessation of violence and a return to dialogue.

As of now, it is unclear how space collaboration between the two sides will be affected by the Russia-Ukraine conflict.

“It’s still too early to say that India-Russia space cooperation would be impacted, as we need to study how far and wide the sanctions [against Moscow go], and whether there will be a trade-off between the U.S. and Russia with regard to sanctions if Russia ceases operations in Ukraine,” Pankaj Jha, a professor of defense and strategic studies at the O.P. Jindal Global University, told Nikkei Asia.

Additional reporting by Kim Jaewon in Seoul and Kiran Sharma in New Delhi.