U.S., Japan work together to airlift supplies to Ukraine 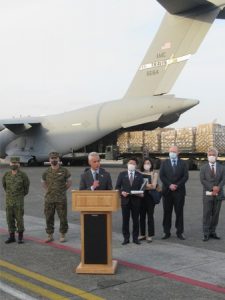 Asahi, Mainichi, Yomiuri, Sankei, Jiji Press, NHK, NTV, and TBS reported on operations at Yokota AB on Wednesday to load onto a U.S. military C-17 transport plane 38 tons of Japan’s nonlethal defense supplies bound for Ukraine. The supplies included bulletproof vests, helmets, and other equipment. The aircraft departed Yokota for Europe. The media outlets said this was the first time for the U.S. military to transport Japanese supplies for Ukraine. Sankei wrote that Japan requested cooperation from the United States based on the U.S.-Japan Acquisition and Cross-Servicing Agreement. The paper also wrote that although Japan has already shipped some supplies to Ukraine by SDF aircraft, it asked for the U.S. military’s cooperation in order to transport the supplies more swiftly. Sankei, Jiji Press, NHK, and NTV quoted Ambassador Emanuel as saying: “Today, our alliance marks a new chapter in our history, as we come together to help our friends in Ukraine.” TBS showed the Ambassador saying: “This is the U.S.-Japan Alliance in action and the United States will help the brave citizens of Ukraine.”