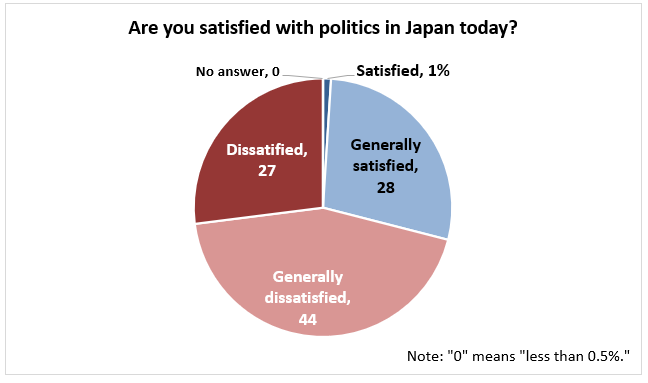 On March 12, Nihon Yoron Chosakai released the findings of its nationwide mail-in survey on the Upper House election this summer. A full 71% of respondents said they are either “dissatisfied” or “generally dissatisfied” with Japanese politics today. Some 56% said that they would like to see the ruling and opposition parties evenly matched in the Upper House after the summer election. Asked what they see as the focus issue in the Upper House election (up to three answers permitted), 54% said “economic measures,” making this the most frequently given response.

A full 69% of respondents said they “don’t think the current political parties are meeting the people’s needs.” The poll revealed the people’s strong dissatisfaction and distrust of politics and political parties today. Asked what government framework would be desirable given the current situation where the Liberal Democratic Party holds a majority in the Lower House, 27% said “a government that has a new framework created through the reorganization of the political world.” Some 23% said “an administration where Nippon Ishin (Japan Innovation Party) is added to the LDP-Komeito coalition.”

[Polling methodology: A total of 3,000 men and women aged 18 or over were randomly selected nationwide from 250 locations on a stratified two-stage random-sampling basis to create a cross-section of Japan’s slightly more than 100 million voters. On Jan. 19, 2022, questionnaires were sent out by postal mail, and 1,902 completed questionnaires had been returned as of Jan. 28. Valid responses were received from 1,841 people, excluding questionnaires completed improperly or by persons other than the intended voter. The valid response rate was 61.4%. The makeup of the polling sample was as follows: male, 49.8%; female, 50.2%. Sections of Fukushima Prefecture heavily impacted by the 2011 Great East Japan Earthquake were excluded from the survey pool.

Nihon Yoron Chosakai is a nationwide public opinion polling entity managed by Kyodo News and comprising 38 of its subscribers including Tokyo Shimbun.]