NEW DELHI — Japanese Prime Minister Fumio Kishida arrives in New Delhi this weekend for a meeting with Indian Prime Minister Narendra Modi, during which the Russia-Ukraine conflict and ways to boost cooperation among Quad nations are expected to be high on the agenda.

Kishida is visiting at Modi’s invitation for the 14th India-Japan annual summit, which is set for Saturday and will be the first meeting between the two leaders, India’s Ministry of External Affairs said on Thursday.

“India and Japan have multifaceted cooperation within the ambit of their special strategic and global partnership,” ministry spokesman Arindam Bagchi told reporters. “The summit will provide an opportunity for both sides to review and strengthen bilateral cooperation in diverse areas as well as exchange views on regional and global issues of mutual interest so as to advance their partnership for peace, stability and prosperity in the Indo-Pacific region and beyond.”

The last India-Japan summit took place in Tokyo during October 2018, with Modi visiting. The planned December 2019 visit to India by then-Japanese leader Shinzo Abe was shelved owing to massive protests in the South Asian country at that time over a citizenship bill. After that, the annual summit mechanism was disrupted by the COVID-19 pandemic.

Pant said Tokyo and New Delhi go beyond a bilateral relationship, with frameworks like the Indo-Pacific-based Quadrilateral Security Dialogue as the two nations want to work together on issues such as China and supply chain resilience.

“Of course, there are differences, [and] in this particular context the Ukraine crisis will take some space [in the Modi-Kishida talks], although I’m sure that the two leaders would not want to make it the centerpiece of the Japanese prime minister’s visit,” Pant said.

Given India’s long-standing defense and strategic ties with Russia, New Delhi has refrained from outright condemnation of Moscow over its invasion of Ukraine. It also has abstained from key United Nations votes on the crisis, calling instead for an immediate cessation of violence and a return to dialogue. 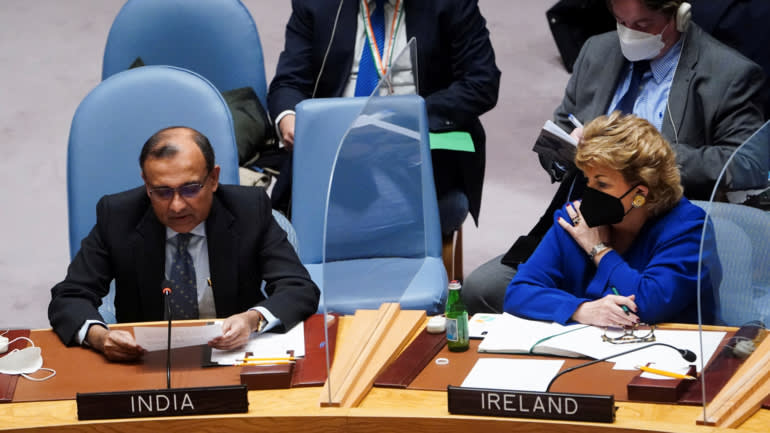 Shamshad A. Khan, an assistant professor of international relations at the BITS Pilani Dubai Campus, advised watching for the tone Kishida adopts in the relationship with India, “considering he is dovish as compared to Abe, who was known for his hawkish position vis-a-vis China and on other regional security issues.”

Regarding the invasion of Ukraine, Khan noted that while Japan and other Quad members — the U.S. and Australia — have unequivocally condemned Russia, India “has maintained silence” considering its strategic ties with Moscow.

Kishida may urge his Indian counterpart “to take a united position” against Russia to ensure that India and other Quad countries are on the same page over the issue, said Khan, author of the book, “Changing Dynamics of India-Japan Relations: Buddhism to Special Strategic Partnership.”

But Pant said that despite the visible differences in terms of India’s stance on the Russia-Ukraine crisis, “I don’t think Kishida will be here to make India change its position.”

“Japan also knows, like the Americans, that there is a real operational problem for India in terms of its defense [weaponry-related] dependency [on Russia], which can’t change overnight,” he said.

Yet Kishida will “certainly apprise India as to where Japan is coming from,” Pant said, as both countries would be concerned “if Russia really becomes a junior partner to China [given that] it is asking for military and economic aid from Beijing.”

“This is something both countries will be thinking about, despite their apparent differences at this point,” Pant said. “Both have a critical interest in ensuring that the regional security architecture is not so overtly dominated by China.”

In an online meeting of Quad leaders this month, the U.S., Japan and Australia urged India to join the rest of the group in denouncing Russia over its invasion of Ukraine. In response, Modi reiterated “the need to return to a path of dialogue and diplomacy.”

India, along with China, was among 35 countries that abstained from voting on a U.S.-sponsored United Nations resolution deploring the Russian “aggression.” The nonbinding resolution was passed by the U.N. General Assembly on March 2, with 141 countries supporting it. Five countries voted against the measure.

Meanwhile, Modi and Australian Prime Minister Scott Morrison will hold the second India-Australia virtual summit on March 21. Modi’s meetings with Kishida and Morrison come ahead of a Quad summit — with U.S. President Joe Biden among the attendees — in Japan at some point this year.