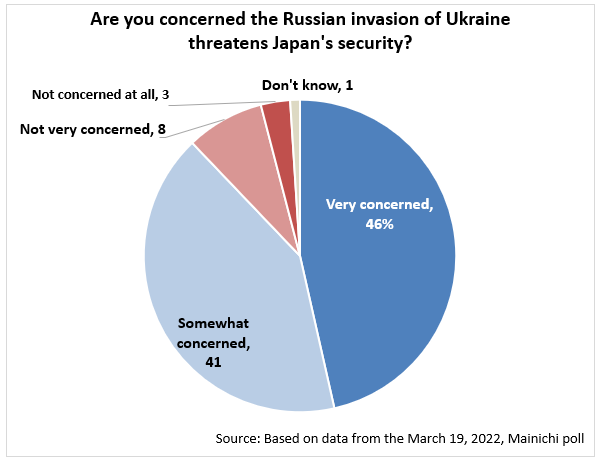 A total of 87% of respondents to a nationwide opinion poll jointly conducted by The Mainichi Newspapers Co. and Saitama University’s Social Survey Research Center on March 19 said they are concerned that Russia’s invasion of Ukraine threatens Japan’s security, with 46% saying that they are “very concerned” and 41% saying they are “somewhat concerned.” Only 8% said that are “not very concerned,” while 3% said they are “not particularly concerned,” and 1% said they do not know.

Meanwhile, 59% said that Japan’s economic sanctions are “appropriate,” while 30% said “tougher sanctions should be imposed.” Only 5% said “sanctions are not necessary.” Japan has announced various measures against Russia in light of its invasion of Ukraine, including freezing assets held by Russian President Vladimir Putin and other individuals as well as those held by Russia’s central bank and other groups, banning the export of semiconductors and communications equipment to Russia, and revoking Russia’s “most-favored nation” trade status based on World Trade Organization (WTO) rules.

Some 61% of respondents said that the Japanese government’s provision of bulletproof vests and the like to Ukraine is “appropriate.” Some 22% said “the government should consider offering more active military support,” and 11% said “it is not necessary for Japan to offer military support.” The Japanese government revised its guidelines on the application of “the Three Principles on Transfer of Defense Equipment and Technology” to provide Ukraine with bulletproof vests, which are defense equipment, and sent them with helmets and other defense supplies to Ukraine. 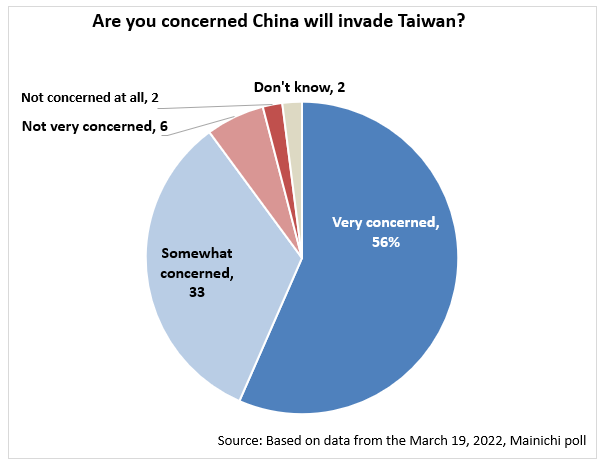 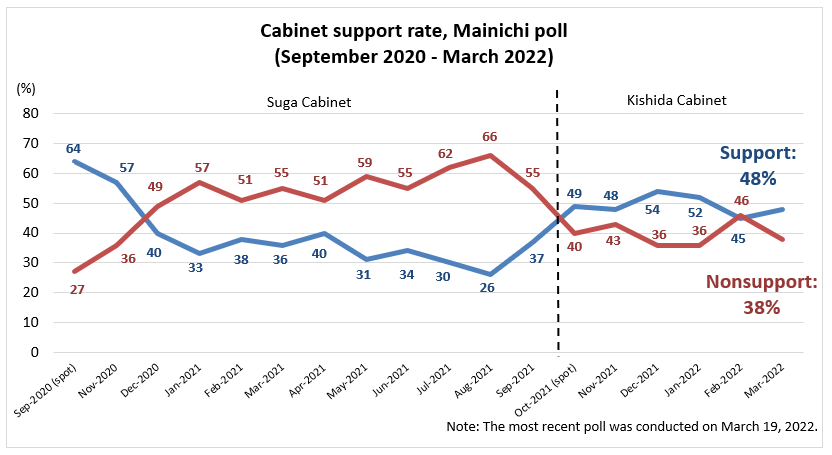 [Polling methodology: The survey was conducted by the Social Survey Research Center and the Mainichi Shimbun on March 19, 2022, of those 18 years old or older. A computer-aided random digit sampling (RDS) method was used to generate phone numbers (both landlines and cell phones) randomly by computer, and an interactive voice response system was used to call those numbers. For mobile phones, people were asked through audio guidance to cooperate in the survey, and those who agreed to participate were sent a short message service (SMS) text message providing a link to an online answer form. For landline phones, respondents were asked questions by interactive voice response system and pushed buttons on their phones to indicate their answer. The target number of valid responses was set at 700 for mobile phones and 300 for landlines phones. Valid responses were received from 718 mobile numbers and 322 landline phone numbers.]