84% say they are “concerned” Russian invasion of Ukraine will lead to China crisis, Sankei-FNN poll 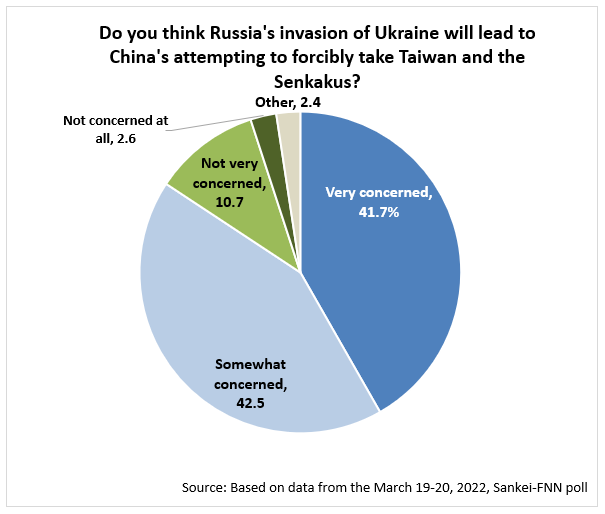 The nationwide public opinion poll jointly conducted by Sankei Shimbun and Fuji News Network (FNN) on March 19–20 probed views on whether Russia’s invasion of Ukraine will lead to a crisis in which China attempts to forcibly take Taiwan and the Senkakus (Ishigaki City, Okinawa Prefecture). A total of 84.2% of respondents said that they are concerned about a China crisis, including those saying they are “very concerned” and those saying they are “somewhat concerned.”  Support for the Kishida Cabinet was 65.8%, up 3.2 percentage points from the previous poll taken on Feb. 19–20. Nonsupport was 27.9%, down 2.1 points from the previous poll.

Support for Kishida has remained at a high level since the launch of his Cabinet in October 2021, with backing exceeding 60% for six straight months. 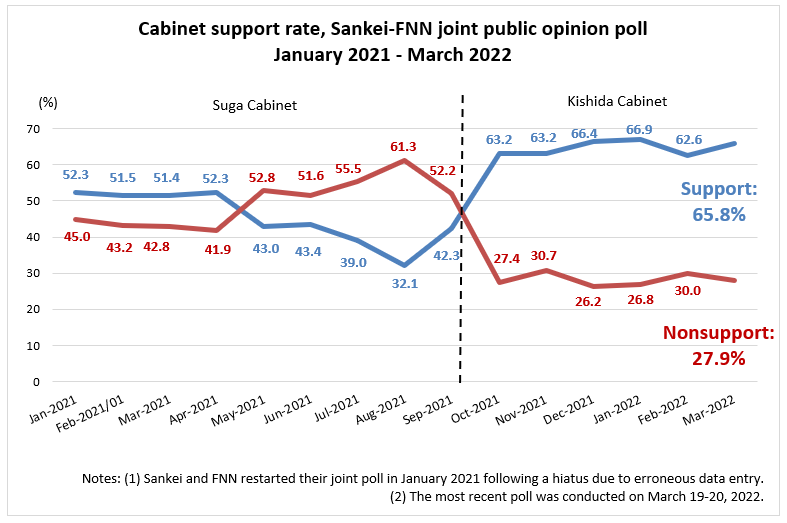 Those approving of Prime Minister Kishida’s handling of the Russian invasion of Ukraine (57.6%) exceeded those disapproving (29.0%). Some 58.8% of respondents said that the economic sanctions taken against Russia will be “somewhat effective” while 6.1% said they will be “very effective.”

With the election of Yoon Suk-yeol as the new South Korean president, that nation will shift to a conservative administration. Some 73.7% of respondents said that there will be “no change” in Japan-ROK ties under the new administration, while only 18.7% said relations will improve.

Those approving of the government’s COVID-19 measures (58.9%) exceeded those disapproving (34.1%). The government and ruling parties are considering disbursing a lump-sum handout to all pension recipients to help tide them over during the pandemic. Some 54.5% of respondents said that such handouts should not be given, while 41.2% said they should be. Meanwhile, some 68.6% of respondents said that the “trigger clause,” which temporarily lowers the gasoline tax, should be unfrozen amid the continuing high crude oil prices.