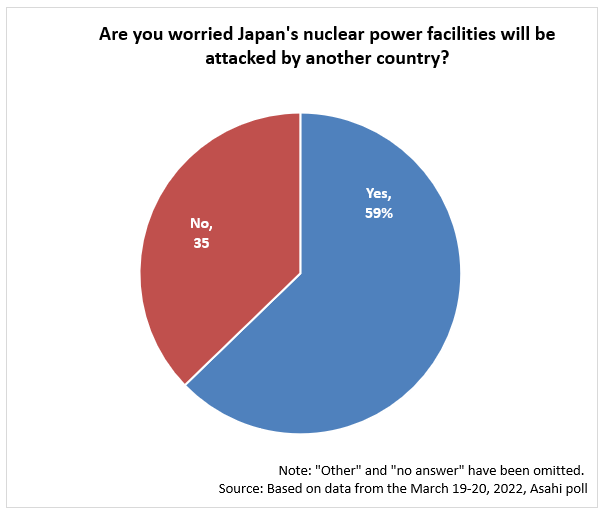 Fifty-nine percent of voters expressed anxiety about Japan’s nuclear power plants coming under attack from another nation following a global scare over the seizure of nuclear complexes in Ukraine by invading Russian forces.

In contrast, 35 percent said they are “not worried” by such an eventuality, according to the nationwide telephone survey conducted by The Asahi Shimbun on March 19 and 20.

The question was asked after Russian forces seized the Zaporizhzhia plant, one of the largest in Europe, which was set ablaze during intense fighting with Ukrainian defenders, among other facilities.

Eleven years have passed since the triple meltdown at the Fukushima No. 1 nuclear power plant triggered by the March 11, 2011, earthquake and tsunami disaster.

Nuclear fears were further inflamed after a powerful earthquake, that registered upper 6 on Japan’s seismic scale of 7, hit off the coast of Fukushima Prefecture late on March 16.

The survey asked respondents whether they are worried about nuclear power accidents caused by natural disasters, such as massive earthquakes.

While 39 percent said that they are worried “very much” about such an eventuality, 49 percent responded that only “to a certain degree.” Combining the figures shows that nearly 90 percent of all those polled were concerned about the issue of nuclear safety. 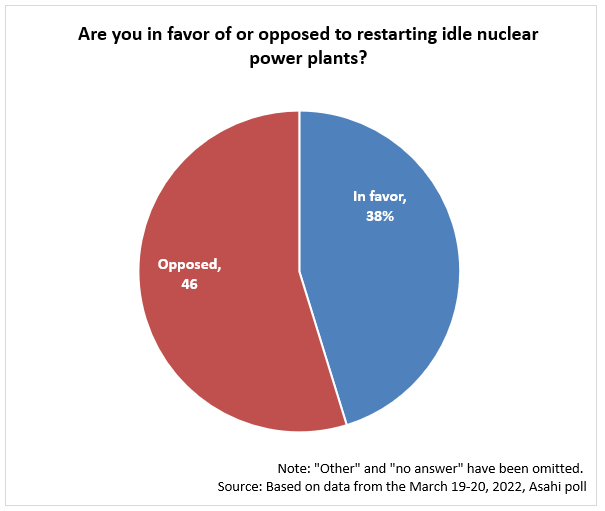 With regard to restarting idled nuclear reactors, 38 percent of respondents backed the move, the same percentage as in the previous survey in February.

On the other hand, 46 percent were opposed to resuming operations, down slightly from 47 percent in the previous survey.

It received 553 replies from 1,123 households with at least one voter for a response rate of 49 percent. Among the 2,212 mobile phone users with voting rights who were contacted, 911, or 41 percent, gave valid responses. The survey obtained a total of 1,464 valid answers.