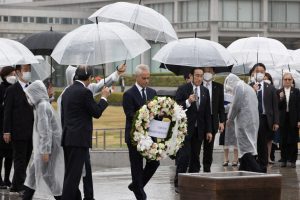 All TV networks and national dailies as well as the regional Chugoku Shimbun, Tokushima Shimbun, Shikoku Shimbun, Kobe Shimbun, Hokkoku Shimbun, Sanyo Shimbun, Kyoto Shimbun, RCC, TSS, and Hiroshima Home TV reported over the weekend on U.S. Ambassador Emanuel’s visit to Hiroshima with Prime Minister Kishida on Saturday. Sankei and the Chugoku Shimbun gave front-page play to the Ambassador’s visit with color photos on Sunday. The media outlets reported that the prime minister and the Ambassador visited the Peace Memorial Park and toured the Peace Memorial Museum, where they viewed the origami cranes folded and donated by President Obama when he became the first sitting U.S. president to visit there six years ago. Both the prime minister and the Ambassador signed the guest book at the museum and later laid wreaths at the cenotaph for atomic bomb victims in prayer for the victims. 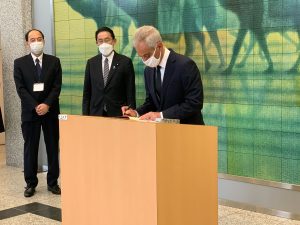 The media outlets also reported on a meeting between Prime Minister Kishida and Ambassador Emanuel held later at the museum, during which they exchanged views on the Ukraine crisis. The media highlighted the prime minister’s remarks that “there is a real concern that Russia could use nuclear weapons” and that “weapons of mass destruction, including nuclear weapons, must never be used.” The prime minister also reportedly welcomed the Ambassador’s visit to Hiroshima by saying it “sends a strong message to the international community.” The media reported that the Ambassador condemned Russia by saying its “unlawful war” in Ukraine has been met with “global condemnation.” He also reportedly stressed that “nowhere are our shared commitments for peace more paramount than here in Hiroshima.” When asked by a reporter about the possibility of President Biden visiting Hiroshima or Nagasaki, the Ambassador reportedly said: “I know he would want to visit one of the two cities, if not both.”

Jiji Press and Kyodo News carried similar stories, with Kyodo adding that the Ambassador said in a tweet after visiting the museum: “The lessons of Hiroshima must be our north star guiding us to a world free of war and open to peace. Let us have the courage and strength to heed the lessons represented in this museum.” Kyodo also reported that earlier in the day, Ambassador Emanuel tweeted that he met with Mori Shigeaki, an atomic bomb survivor whom President Obama embraced in 2016 during his historic visit to the city in 2016.

NHK and Mainichi also reported that Prime Minister Kishida and Ambassador Emanuel had dinner accompanied by their wives on Saturday, during which they exchanged views on sports and cultural exchanges.