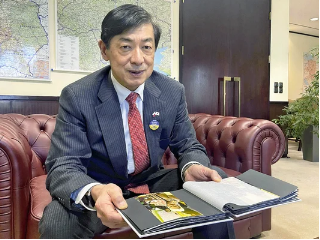 Article and photo by Sasako Minako in Warsaw

Japanese Ambassador to Poland Miyajima Akio sat down for an interview with the Yomiuri Shimbun on March 23 and stressed the need for mid- to long-term financial support to Poland and other neighboring countries accepting many Ukrainian refugees.

Miyajima said, “The world is now focusing its attention on how it can support Ukraine, but Japan and other members of the international community must consider how to help countries accepting [Ukrainian] refugees.”

Poland guarantees [Ukrainian] refugees access to the medical service on par with its citizens and provides a lump sum of 300 zlotys (approx. 8,500 yen) per person. Miyajima says the Polish people think of Ukraine as more than just a neighboring country. He also pointed out that Poland is “calmly assessing its security interests” to determine whether the Russian military threatens the nation as its attacks get closer to the Ukraine-Poland border.

According to the UN High Commissioner for Refugees (UNHCR), more than 3.6 million people have fled Ukraine and more than 2.1 million Ukrainian evacuees have entered Poland as of March 22.