85% think sanctions on Russia are “appropriate” or “should be made more stringent,” Nikkei poll 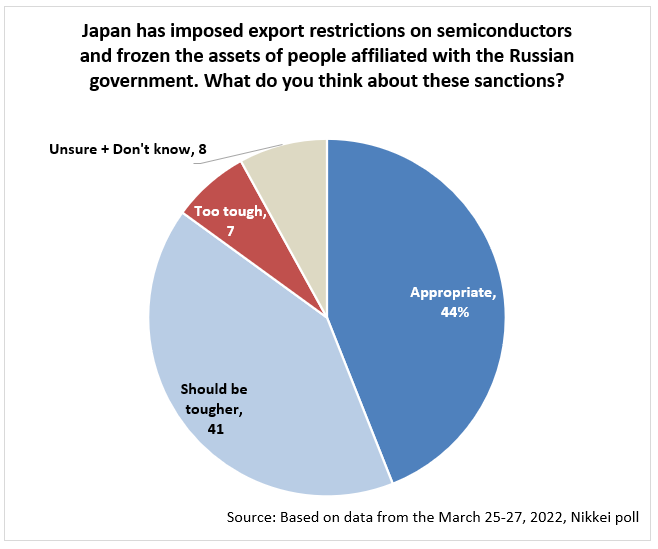 The Nikkei poll conducted on March 25–27 probed views on the Ukraine situation. A total of 85% approve of the sanctions, with 44% of respondents saying that the economic sanctions the Japanese government has taken against Russia are “appropriate” and 41% saying “they should be made tougher.” Only 7% of respondents said the sanctions are “too harsh.”

In step with Western countries, Japan has imposed export restrictions on semiconductors and frozen the assets of people affiliated with the Russian government. Japan also supported Western countries’ exclusion of some Russian banks from the international settlement system. 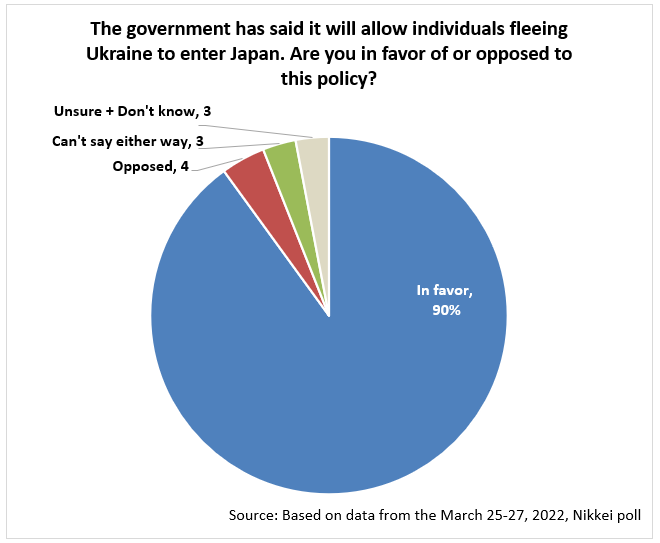 Asked how they feel about Japan’s decision to accept persons fleeing from Ukraine, 90% of all respondents said they approve of the policy, easily outdistancing the 4% who said they do not. A plurality of 92% of both LDP supporters and opposition party supporters said that they are in favor of accepting those fleeing Ukraine.

In protest against Japan’s sanctions, Russia has announced its withdrawal from peace treaty negotiations with Japan, which include discussion of the Northern Territories. Since the Abe administration, Japan has pursued the policy of using economic cooperation to advance the peace treaty negotiations. Asked for their views on Japan’s traditional policy, over half of respondents (52%) said Japan “should abandon that policy and develop a new strategy.” This is a full 15 percentage points higher than the 37% of respondents who said that Japan “should maintain its traditional policy and strive to restart negotiations.” The negotiations with Russia have been at a standstill in recent years, and forward momentum has waned. The current policy is hard to maintain as economic cooperation is difficult given the invasion of Ukraine. 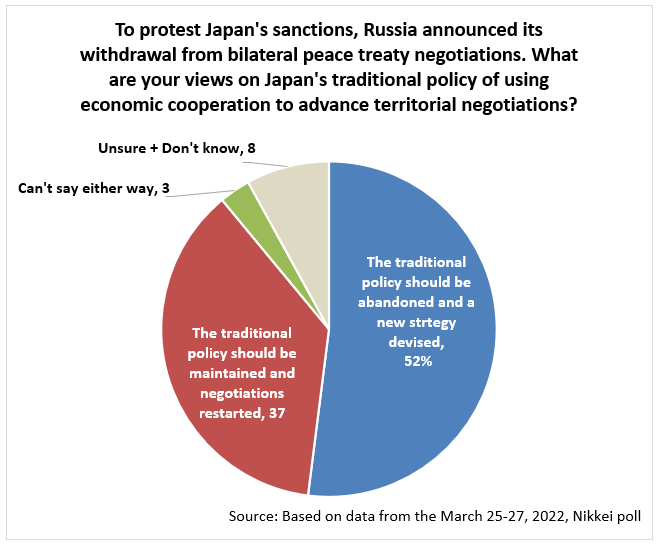 On March 24, Prime Minister Kishida Fumio told reporters that he explained to the leaders of the G7 countries that Japan “would remain resolute and undaunted in the face of Russia’s announcement” it would withdraw from bilateral talks. Since Russia’s invasion of Ukraine, the Japanese government has also started to use the expression “illegal occupation” with reference to the Northern Territories, a term Japan refrained from using in recent years.

Some 57% of LDP supporters said that Japan “should abandon its traditional policy,” while 34% said it should “continue with it.” The polling figures for opposition party supporters on this matter were 62% and 33%, respectively. Some 77% of respondents said they are “concerned” that the Russian invasion and the alteration of [Ukraine’s] borders may lead to China’s using force against Taiwan if the international community is unable to stop the Russian aggression. This finding is unchanged from the February poll, which was conducted [on Feb. 25–27] right after the Russian invasion started. 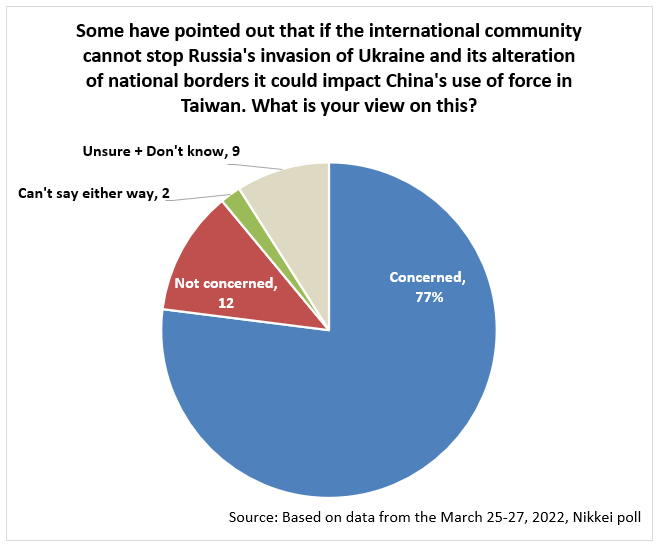