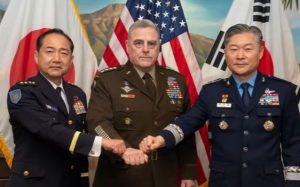 NHK, Nikkei, Kyodo, and Jiji reported that top military officials of the U.S., Japan, and South Korea assembled in Hawaii on Thursday and confirmed coordination and cooperation to deal with regional challenges, including North Korea’s renewed provocations. Gen. Milley, chairman of the U.S. Joint Chiefs of Staff, Gen. Yamazaki, chief of staff of the SDF Joint Staff, and Gen. Won, chairman of South Korea’s Joint Chiefs of Staff, also shared the importance of the steadfast U.S. commitment to the defense of Japan and South Korea and maintaining the rules-based international order, according to a Japanese readout. In the first meeting of its kind in almost a year, the generals also exchanged views on joint training to strengthen trilateral defense partnership as part of efforts to realize a free and open Indo-Pacific. Indo-Pacific Commander Aquilino, USFJ Commander Rupp, and USFK Commander LaCamera reportedly sat in on the session.

According to Kyodo and Yomiuri, the U.S. and Japanese officials held bilateral talks on Wednesday on the margins of the meeting and discussed the situation in Ukraine and North Korea’s repeated missile tests. They agreed to not allow the status quo to be altered by force and to promote mutual and international defense cooperation to rein in China.