The movement to eliminate male and female differences at schools began to take hold in 2015 when the Education Ministry issued guidance to education boards around the nation to take steps to consider transgender and other sexual-minority students by, for example, relaxing or scrapping gender codes for uniforms. Today, a growing number of schools allow students to choose gender-neutral uniforms so they’re not forced to dress according to their sex at birth. The Tokyo Metropolitan Education Board announced on March 24 that among the 180 public high schools in the capital that require uniforms, about 80%, or 147, offered trousers as a uniform option for female students in the 2021 school year, up from 50%, or 93, in 2016.

Japan’s school uniforms trace their origins to the Meiji Era (1868-1912). Gakushuin, an academy in Tokyo for the imperial family and nobility at the time, adopted in 1879 a uniform for male students based on the formal attire of Japanese naval officers—cap, high-collared jacket, and trousers. High schools for women similarly embraced uniforms for their students starting around 1900. Instead of Western-style military uniforms, though, they adopted hakama, traditional pleated

trousers worn over a kimono. Female school uniforms began to change in the 1920s to Western-style clothing such as sailor suits. As Japan gradually modernized over subsequent decades and enrollment at junior and senior high schools rose, uniforms evolved from unique items for elite students to outfits worn by ordinary youths.

However, from the late 1960s to early 1970s, there was a backlash against school uniforms as high school students influenced by the student movements at that time rebelled against the uniforms that they regarded as a symbol of classroom control. In response, many schools stopped requiring uniforms, but most schools kept their dress codes in place. In the late 1980s, schools began switching from traditional high-collared jackets for male students and sailor blouses for female students to more gender-neutral blazers, but gender-oriented elements remained. 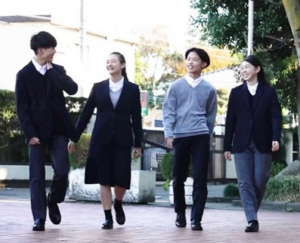 Some people criticize school uniforms for not allowing students to express their individuality, saying they may discourage young people from developing their own personalities. However, others find merit in school uniforms, arguing that students may be encouraged to develop a sense of unity with their classmates by wearing the same clothes. They also argue that uniforms could help preempt the problem of children being able to identify one another’s socioeconomic status based on their clothing and using this as a basis for bullying and discrimination. Another benefit of school uniforms is that they are cheaper than brand-name or certain styles of clothing, so the requirement for uniforms could save parents money. However, as the cost of a school uniform usually adds up to around 40,000 to 60,000 yen ($320 to 400), equivalent to the price of a business suit, some schools decided this year to adopt articles of clothing sold by UNIQLO as uniforms for their students. The casual clothing company’s affordable prices allow students to purchase all the necessary items for a total of about 10,000 yen ($80), a much smaller hit to the wallet than traditional uniforms.

School uniforms have often been affected by cultural changes in Japanese society, and a growing awareness of gender equality is behind recent moves to introduce gender-neutral uniforms. According to NHK, Sanyo Junior High School in Himeji, Hyogo Prefecture, decided last year to make jackets and pants its standard uniform for both male and female students. Those who wish to wear skirts can choose a skirt version of the uniform if they prefer, however. The school made the decision in response to a question from a female student: “Why don’t we have the option of wearing trousers like male students do?” Female students had hoped for years to wear pants at school because they allow them to move around more easily, protect them from the cold, and give them a sense of security since they don’t have to show their legs. The network said schools in Japan are gradually introducing genderless options for uniforms amid the growing recognition of diversity in the country.