Rebels with the cause of escaping unjust school rules 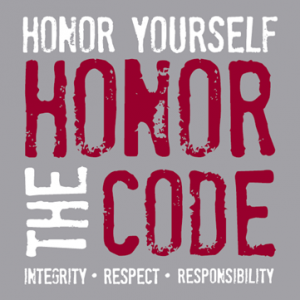 Last year a 19-year-old Tokyo woman filed an unusual lawsuit seeking compensation from her high school for emotional distress she suffered in her senior year. She claims to have been hounded by its administrators to drop out or face expulsion for flouting the ban on dating. The high school, which is known for demanding students adhere to strict “ethical principles,” allegedly insisted students should not engage in romantic relationships. The school authorities reportedly warned that expulsion would result in the loss of all credits she had earned until then, which would make it almost impossible for her to earn a high school diploma even from a different institution. The plaintiff demanded 3.7 million yen ($31,000) in damages, arguing that the school’s pressure on her was illegal since the “no dating” policy violated her “constitutional right to pursue happiness.”

The defendant, on the other hand, opined that as a private entity it is entitled to implement standards of conduct in line with its traditions and philosophy and that every student is expected to abide by those since they elected to enroll in the school with advance knowledge of them in the first place. The school defended the ban on dating by explaining that it is aimed at protecting “immature minors” from psychological and physical suffering potentially arising from romantic relationships so they can concentrate on their top priority—their studies. The legal dispute is still pending.

As preposterous and impractical as it may sound, the anti-dating rule is one of the many typical yet controversial behavioral codes that have existed at Japanese middle and high schools for decades, according to local media outlets (Mainichi, Asahi, Weekly Toyo Keizai). Here are some examples of other such guidelines: students are required to participate in afterschool club activities, socks must not reach more than one-third the way up the calf, and girls must not wear ponytails because they arouse male students.

Some of these guidelines might simply seem benign or ludicrous, but others are downright discriminatory and offensive. Nearly half of Tokyo’s public high schools require students whose hair is not black and straight to submit certification to prove it’s natural. And some prefectural-run schools even mandate that their students’ underwear be white, with teachers allegedly checking it when the students change into their gym clothes. 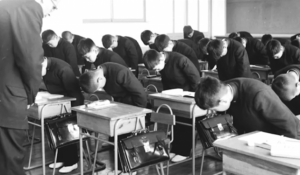 The list of outdated, pointless, and intrusive school rules, which are commonly known in Japan as burakku kosoku, is seemingly endless. Most were established many years ago with the aim of preventing students from becoming rebellious and nipping in the bud any problems at school. Some students have rejected these as infringements of their individuality. These “unruly” youths have fought hard for the repeal of the burakku kosoku repealed, with some even taking their complaints to court.

Such efforts, however, have been in vain. The Supreme Court issued a ruling in 1996 stating that a private academy’s dress code prohibiting students from perming their hair was “not irrational,” reasoning that it signified the educational institution’s goal of teaching students to be “clean, humble, and not tempted by fancy trends.” In a case in which an Osaka girl sued the prefectural authorities over a school regulation requiring students to have “black hair,” a local court concluded that the rule was “reasonable under commonly accepted norms” because it was intended to “prevent juvenile delinquency, which is a legitimate educational purpose.”

Educational consultant Seno Masatoshi says school administrators must understand that the rigid enforcement of unreasonable rules makes it difficult for students to think independently and develop relationships of trust with their teachers, instead compelling them to respect authority mindlessly. He cites data suggesting that as many as 10,000 middle and high school students nationwide skip classes or drop out of school annually in the face of such stringent school rules.

Kano Yuta, a social activist who has been deeply involved in youth education in the town of Otsuchi, Iwate, since the 3/11 triple disaster, explains that school administrators are tempted to adopt strict regulations to avoid the criticism that their students are undisciplined. He emphasizes that in seeking to change obsolete ethical standards, it is wrong to simply blame school authorities since such an approach ends up “pitting teachers against students.” Instead, Kano advocates making up new rules from scratch and involving all stakeholders—students, teachers, parents, and even community representatives such as local businesspeople—in the process. The educator recommends that students be given a chance to draw up a plan for their ideal school and then come up with the rules or codes of conduct for students. Teachers, parents, and community members should offer their opinions or advice as well. The instructor explains that students of one Iwate high school successfully persuaded their teachers to repeal a ban on “two-block haircuts” by citing local business operators’ rejection of the school authorities’ assumption that such a hairstyle would give employers the impression that a job applicant is “untidy.”

“Many of my students who’ve gone through the rulemaking process have learned to address not only school problems but also current social issues from a variety of viewpoints,” says Kano, adding that such students tend to become more proactive in class. 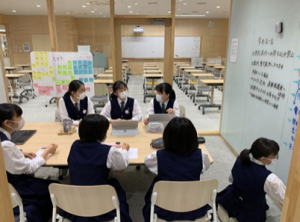 Although many of the students defying school rules have ended up losing their legal battles, their resistance to such illogical conformity has not been completely fruitless. The Tokyo Metropolitan Education Board decided recently that beginning in the new school year on April 1, five of the six burakku kosoku will be disallowed, including banning non-white underwear and two-block haircuts as well as behavioral guidance that includes such misleading language as “appropriate for high school students.” The board reportedly stressed that the decision was made while taking into account the opinions of numerous youths, with its spokesperson saying: “It’s important to establish an environment in which students are allowed to take the initiative in making decisions.” Many educational experts praised Tokyo’s move as “epoch-making,” expressing hope that students in rural areas and at private schools will continue to attempt to break free of the fetters of unjust school rules.