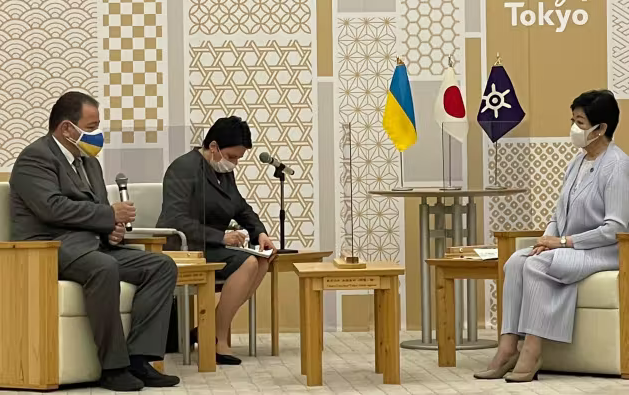 On April 11, Ukrainian Ambassador to Japan Sergiy Korsunsky met with Tokyo Governor Koike Yuriko at the Tokyo Metropolitan Government office to discuss Russia’s invasion of the country. Koike briefed the Ukraine envoy on a package of measures that the metropolitan government is extending to Ukrainian evacuees, including securing housing for them and setting up consultation offices. The ambassador expressed his gratitude for the support.

At the outset of the meeting, which was opened to the press, Koike described the killing of civilians and destruction of cities as “heart-wrenching” and said, “We will do whatever we can do to support those who have fled Ukraine and ensure they can live safely in Tokyo.” Ambassador Korsunsky responded by saying, “I am grateful for the support from the metropolitan government to provide those who’ve lost everything with a safe place to live”

According to the metropolitan government, the meeting was requested by the ambassador’s office. After the meeting with Koike, he met with Tokyo Metropolitan Assembly Speaker Miyake Shigeki and other assembly members on the same day.