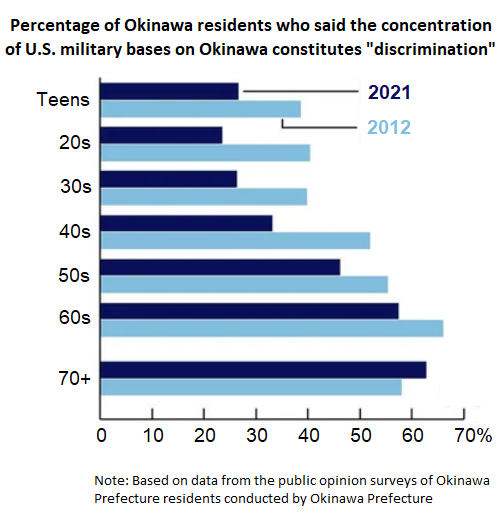 According to the public opinion survey of Okinawa Prefecture residents conducted by Okinawa Prefecture last year, about 25% of those age 30 or under think the concentration of the USFJ military bases in Okinawa constitutes “discrimination.” This figure is less than half that of respondents age 60 or over who gave this answer. A half century has passed since Okinawa was returned to Japan in 1972, and the younger generation seems to accept the current situation of the bases.

Okinawa Prefecture has conducted this survey every three to five years since 1979 with an eye toward ensuring that changes in Okinawa residents’ values ​​and needs are reflected in the administration of the prefecture.

About 70% of USFJ military facilities are located in Okinawa, and the survey has probed views on this fact since 2012. According to the results of the 2021 survey, which were released in March, about 60% of respondents in their 60s or over said the concentration of bases on Okinawa constitutes “discrimination,” while only about 25% of respondents in their 30s or younger gave that response. There is a downward trend in all age groups except those aged 70 and over. In the 2012 survey, about 40% of those in their 30s and under said the concentration on Okinawa constitutes discrimination, and the figure has decreased since then.

In another survey conducted by Waseda University and other institutions in 2017 of about 500 Okinawa residents, the younger the respondent, the less opposed they were to the bases. Associate Professor Yoneda Yukihiro (sociology) of Wako University, who assisted with the Waseda-led survey, said, “Young people have no personal experience of the Battle of Okinawa or life under U.S. rule, and they tend to be focused on security and the prefecture’s ‘economic dependence on the U.S. bases.’ The generational gap in views on the U.S. military bases is widening.”