Tunnel work and construction point to restoration of Punggye-ri facility

TOKYO — Recent satellite photos suggest that North Korea is preparing for what would be its first nuclear weapons test since September 2017, with work apparently underway on bringing the Punggye-ri underground testing site back into operation.

Photos taken April 5 by U.S.-based Planet Labs and obtained by Nikkei show piles of material near Punggye-ri, believed to be debris from tunnel excavation. Jeffrey Lewis, a professor with expertise in East Asia nonproliferation at the Middlebury Institute of International Studies at Monterey, noted signs of repair work on tunnels to the underground facilities — a possible sign that nuclear testing may resume soon.

North Korea had demolished the Punggye-ri test site in May 2018 as a show of its willingness to denuclearize as it pursued dialogue with the U.S. Although Pyongyang had claimed the facilities were completely destroyed, experts said at the time that they could potentially be restored.

After talks broke down, the North resumed missile launches and other provocative moves. Leader Kim Jong Un said early this year that Pyongyang would consider “restarting all temporarily suspended activities,” which some observers have speculated could include nuclear testing at Punggye-ri.

Lewis and other researchers said in March that satellite imagery of the site from Maxar Technologies showed indications of new construction and repair of an existing building with the use of fresh lumber. The tunnel work in the more recent pictures hints at steady progress on preparations for testing.

North Korea’s weapons tests sometimes coincide with major holidays there, and Friday marks the anniversary of the birth of North Korea’s late founder, Kim Il Sung, celebrated as the Day of the Sun. The U.S., South Korea and Japan worry that Pyongyang could make another move that day, following up on last month’s test of an intercontinental ballistic missile.

“We are worried that, in connection with the upcoming April 15 anniversary, that the DPRK may be tempted to take another provocative action,” Sung Kim, the U.S. special representative for North Korea, said earlier this month. North Korea’s formal name is the Democratic People’s Republic of Korea.

“I don’t want to speculate too much, but I think it could be another missile launch, it could be a nuclear test,” he said when asked about further details.

Pyongyang may also have restarted nuclear development at its Yongbyon complex, which had previously been shut down.

An analysis of nighttime lights by the Colorado School of Mines, based on NASA satellite photos, shows that while monthly average illumination declined slightly from 2018, it has risen since 2020 to around 30% above the 2017 average.

An August 2021 report from the International Atomic Energy Agency observed “indications, including the discharge of cooling water, consistent with the operation of the reactor” since early July.

Nuclear weapons testing can be tracked with seismographs. The Comprehensive Nuclear-Test-Ban Treaty Organization monitors compliance with the treaty through seismographs all over the world.

Seismic waves radiate so quickly that the shock from a test can be picked up within minutes.

Evidence of a North Korean test in September 2017 was collected via seismograph in Japan. The Japan Meteorological Agency logged a magnitude-6.1 earthquake that originated from a site near Punggye-ri.

The temblor was considered to be of nonnatural origin, given the apparent lack of the secondary S waves that are a marker of natural earthquakes. Such signs would be picked up by seismographs again if North Korea conducts another nuclear test.

Bigger tests in the works?

North Korea announced its withdrawal from the Nuclear Non-Proliferation Treaty in 2003 to develop its atomic arsenal. The country held its first test in 2006, followed by other tests every few years or so.

The 2017 test was much larger than the previous five tests. North Korea claimed to have successfully tested a hydrogen bomb that can be loaded onto an ICBM.

Japan’s Defense Ministry estimated the explosion at 160 kilotons — more than 10 times the size of the previous test and approximately eight times the scale of the atomic bomb that the U.S. dropped on Nagasaki in World War II.

As North Korean nuclear tests increase in scale, there is no ruling out that the next one would be even larger.

Pyongyang is developing missiles alongside nuclear weapons, such as through last month’s ICBM test. The North has launched 13 missiles so far this year, according to the Middlebury Institute’s James Martin Center for Nonproliferation Studies — seven more than in 2021.

The threat against Japan continues to grow. The Defense Ministry estimates that North Korea is believed to possess the capabilities to attack Japan with a ballistic missile loaded with a nuclear warhead. 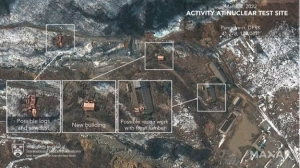 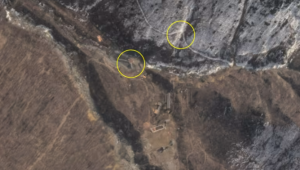 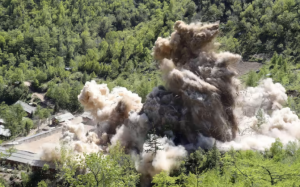 North Korea demolishes its nuclear testing facility at Punggye-ri in front of the international media on May 24, 2018. © News1-Dong-A Ilbo/Getty Images 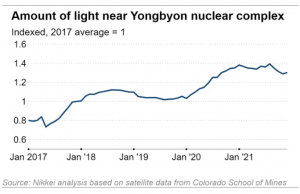 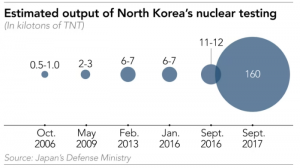