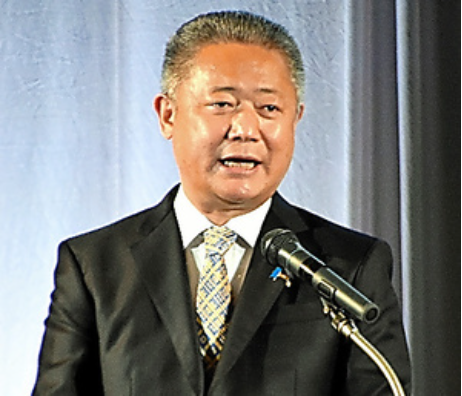 It was ten years ago that Nippon Ishin co-leader Baba left his beloved Osaka for his “assignment” in Tokyo. “Instructions” suddenly came from the political party’s Osaka headquarters ordering him to do so. Baba is party co-leader, but he dedicates himself to acting as “mid-level manager” day to day.

Baba, who heard the comment in Tokyo, took it as an “instruction” and ordered the Lower House member in charge of policy to compile proposals on restarting nuclear plants to submit to the government.

But Baba did not simply wait to receive instructions. In March, Hase Hiroshi, 60, ran in the Ishikawa gubernatorial election. Hase used to belong to the Liberal Democratic Party (LDP) intraparty faction led by former Prime Minister Abe Shinzo, 67.  Years earlier, Nippon Ishin offered Abe the party’s top position when the party was preparing to enter national politics. Since then, Abe and Matsui have maintained good ties.

Baba anticipated that Abe would ask him via Matsui to back Hase, so he built a consensus within the party to ensure no disagreement. Later, Nippon Ishin decided to support Hase when Matsui gave the word to do so, saying, “Yes, let’s go with him.” Hase secured victory by a margin of 8,000 votes.

Nippon Ishin is the only national party where the party leader’s wishes are given the highest priority and Diet members follow them.

Matsui stressed the legitimacy of his unilateral decision in a speech he gave at a party convention in March. “We’ve been working for ten years on the belief that the country cannot be reshaped by a party where Diet members are at the top of the pyramid and local politicians support them.”

But some Nippon Ishin members are dissatisfied with that and say, “It’s not right that Diet members do not have the initiative in the Diet.” Baba is aware of that but still follows Matsui’s instructions. He does not think himself as “the ace pitcher and the cleanup batter.” “My job is to facilitate Matsui’s wild instructions based on his sharp political instincts. I’m the catcher and the eighth batter,” Baba says.

Nippon Ishin became the second largest opposition party after winning 41 seats in the October 2021 Lower House election. The party has a long-held dream of evolving from a “regional group” in Osaka into a “national group.” But the party still has the strong awareness that it is “headquartered” in Osaka.

Nippon Ishin was a regional political party in Osaka until it entered national politics in 2012. The “west team” led by then Osaka Mayor Hashimoto Toru and then Osaka Gov. Matsui and the “east team” led by Ishihara Shintaro, who had resigned as Tokyo governor, joined forces and won 54 seats in the Lower House election [that year].

At that time, Baba and some other Nippon Ishin members were ordered to leave Osaka and “relocate to Nagatacho without taking their families.” In his 17th year of working as a Sakai municipal assembly member, he heard about a plan to form a new party from Matsui, with whom he worked together in the LDP’s Youth Division. Baba felt strongly about the plan and left the LDP to join the launch of Osaka Ishin no Kai as a regional political party. Baba says, “Had it not been for Matsui, I would have never joined Ishin.”

But things were not so easy in Tokyo. The east team rebelled against the party’s tradition of making decisions primarily in Osaka, and the party split in 2014. In the Lower House election in 2017, Nippon Ishin secured only 11 seats due to the turmoil that arose from the party’s partnership with the Party of Hope.

Nippon Ishin’s Osaka headquarters was not stable, either. The party’s centerpiece policy of the “Osaka Metropolitan Plan” was rejected in local referendums in 2015 and 2020. That prompted Matsui, as the party’s founder, to announce his retirement from politics in spring 2023 to take responsibility for the rejection of the plan.

It is pretty much common knowledge in Nagatacho that a “third political party” will not last long. Nippon Ishin made a comeback, however, in the Lower House election held last autumn. Baba is now tasked with keeping up the momentum and is busy working for the party’s growth.

“You felt sick to your stomach earlier today, didn’t you?” Baba said one night in February to Maehara Seiji, election committee chief of the Democratic Party for the People (DPFP), 59, at a Chinese restaurant in Tokyo. Nippon Ishin was cooperating with the DPFP in the Diet, but earlier that day, the DPFP took the unusual move of backing the government’s initial budget proposal for fiscal 2022 and the bill passed the Lower House. Maehara opposed his party’s support of the budget and boycotted the voting on grounds of poor health. Baba did not fail to sound out Maehara, asking, “The DPFP wants to join the LDP-Komeito coalition, doesn’t it?”

Baba is also responsible for maintaining the relationship with the leading figures in the ruling bloc. Every time he meets with former Prime Minister Suga Yoshihide, 73, over sake to talk about the Osaka-Kansai Expo and the Osaka Prefecture and Osaka City plan to host a casino-featuring integrated resort (IR), Baba always bows and says, “I appreciate your cooperation.”

Baba says: “Ishin has finally begun to ascend after repeatedly going into a Dutch roll immediately after takeoff. It is hard to continue to the path of ascent.”