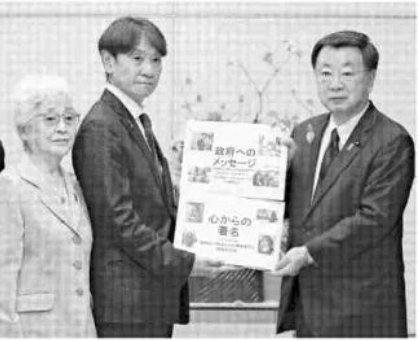 On April 20, eight people who attended elementary school or junior high with Yokota Megumi in Niigata met at the Prime Minister’s Office [Kantei] with Chief Cabinet Secretary Matsuno Hirokazu, who is also the minister in charge of the abduction issue. Megumi was abducted by North Korea when she was 13.

Ikeda Masaki (age 57), who is the representative of the “Association of Yokota Megumi’s Classmates,” handed Matsuno the signatures of 1,572 people demanding Megumi be rescued as soon as possible. “Nothing has happened in the 45 years (since Megumi was abducted), he said. “We would like to see progress toward a solution.” Megumi’s mother Yokota Sakie (86), who also attended the meeting, said, “We would even just like to be given time to see her and say, ‘I’m glad to see you are well.”