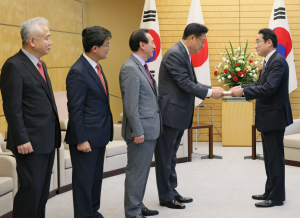 All national dailies reported on Prime Minister Kishida’s meeting with a delegation representing South Korean President-elect Yoon Suk-yeol on Tuesday at the Kantei, noting that the meeting lasted about 25 minutes. The papers wrote that the two sides agreed to work together to improve ties between their countries. Kishida reportedly told the ROK delegation that given that the rules-based international order is under threat, strategic cooperation between Japan and South Korea as well with the United States is needed now more than ever and that Japan and South Korea have no time to spare in improving their relations. Kishida added that the two nations need to resolve their outstanding issues including the issue of the former requisitioned worker. Mainichi speculated that Kishida, despite cautious views within the GOJ and the LDP, decided to meet with the delegation in the belief that bilateral cooperation between Japan and South Korea and trilateral coordination between the two nations and the United States must be strengthened in response to the threats posed by North Korea and China following Russia’s invasion of Ukraine.

Asahi conjectured that moves by the United States prompted Kishida to meet with the ROK delegation, pointing out that the Biden administration stated in its Indo-Pacific strategy released in February that the United States will work together with partners in the region and beyond to confront China and mentioned promoting strengthened Japan-ROK relations. The paper noted that Ambassador Emanuel told the press during his visit to the USS Abraham Lincoln with Foreign Minister Hayashi on April 23 that he looks forward to the start of a new chapter in U.S.-Japan-ROK relations based on their new friendship. The paper went on to say that Washington urged the incoming administration to make maximum efforts to improve South Korea’s ties with Japan in exchange for its agreement to have President Biden visit South Korea ahead of Japan in May.

The delegation reportedly told Kishida that President-elect Yoon attaches importance to relations with Japan and hopes to improve bilateral ties together with Japan. According to Yomiuri, the delegation handed Kishida a letter from President-elect Yoon, saying that Yoon is hoping to meet with Kishida at an early date. Chung Jin-suk, the deputy speaker of the National Assembly and leader of the delegation, told the press that the delegation had a good discussion with Kishida and that the two sides agreed on the need to make efforts to achieve common interests in building forward-looking relations. However, Yomiuri and Asahi speculated that it will not be easy for the Yoon administration to come up with specific measures to resolve the history issues with Japan at an early date due to Yoon’s weak political base.