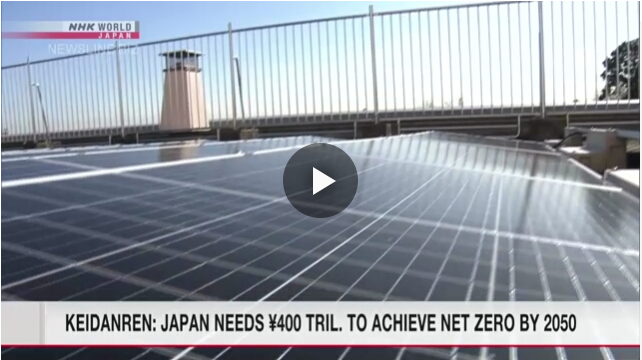 Japan’s biggest business lobby estimates that about 400 trillion yen, or about 3.2 trillion dollars needs to be invested for the country to achieve net zero greenhouse gas emissions by 2050.

NHK obtained a draft position paper by the Japan Business Federation, or Keidanren, on how the government should reach its target. It says that a mid- to long-term average of 2 trillion yen, or nearly 16 billion dollars, a year in government spending would be needed to encourage private investment.

It says this should be funded by the government issuing bonds designed specifically to support environmental projects.

The draft also calls for the continued use of nuclear-power generation in light of Japan’s precarious energy security. In addition, it advocates using hydrogen and ammonia for thermal-power generation.

The draft paper stresses that the introduction of a carbon tax would be highly likely to harm the global competitiveness of Japan’s industries.