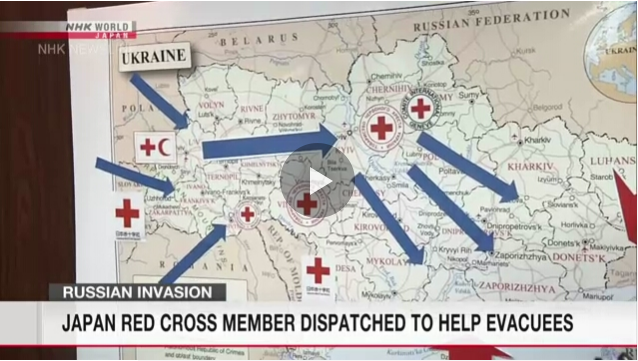 The Japanese Red Cross Society will provide medical support in Ukraine, where more than 7 million people have been displaced by the Russian invasion of the country.

The majority of evacuees are staying in western Ukraine, reportedly putting the local medical system under strain.

The Japanese Red Cross Society will dispatch a member to the region for the first time.

Nakazato Yasutaro, a pharmacist at the Japanese Red Cross Osaka Hospital in western Japan, will open a temporary clinic in western Ukraine’s Uzhhorod with staff from the Finnish Red Cross from Saturday.
He will also procure and manage medicine and medical equipment from within Ukraine and overseas.

Before his departure, Nakazato noted that the demand for medical care is growing as more people are becoming evacuees. He said launching a clinic is a big step forward, although it may seem insignificant. He said he has been wondering if there is anything he can do to help and that he wants to provide medical support to local people.

The Japanese Red Cross Society says many evacuees suffer mental scars as the fighting drags on. It faces the challenge of providing sufficient medical assistance, including mental care.