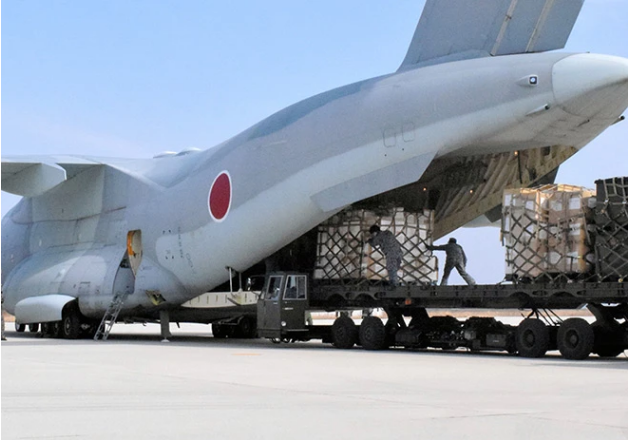 A strong case can be made for Japan to provide aid to Ukraine in concert with other countries to support the beleaguered nation against Russia’s unpardonable aggression.

But the government’s unprecedented decision to provide defense equipment to a country involved in armed conflict raises grave questions about Japan’s commitment to its restrictive arms export policy. As such, the government is obliged to offer a more thorough explanation to ensure complete transparency in the procedures.

More to the point, this special support to Ukraine should not lead to a further easing of Japan’s principles concerning arms exports.

In response to a request from Ukraine, the government last month provided the country with bulletproof vests, helmets, tents and field rations. This month, the government announced it will also supply Ukraine with drones and gas masks as well as protective clothing for defense against chemical agents.

Japan will ship noncombat camera-equipped drones to Ukraine, which, unlike those provided by the United States and other countries, do not carry weapons. They are expected to be used for intelligence,

surveillance-gathering and reconnaissance. In Ukraine, however, drones are used to detect and identify Russian military targets for attacks. Unlike bulletproof vests and protective masks, drones of any type cannot be regarded as purely defensive equipment.

For half a century, Japan’s three principles regarding arms exports effectively banned it from providing weapons to other countries.

But in 2014, the Abe administration arbitrarily replaced the longstanding policy with its “Three Principles on Transfer of Defense Equipment and Technology.”

This shift made it possible for Japan to export arms if three requirements are fulfilled. Firstly, weapons must not be exported to a state party to a conflict. Secondly, the government must restrict instances where arms exports are allowed and conduct strict advance inspections of individual cases. The government is also obliged to reach an advance agreement with the recipient on any unintended use or a transfer to a third-party nation.

Ukraine is involved in a war, but is not deemed to be a “state party to a conflict” under the three principles, which define the term as “a country against which the U.N. Security Council is taking measures to maintain or restore international peace and security in the event of an armed attack.”

But Ukraine does not qualify under the terms where arms exports are permitted as described in the guidelines for implementing the three principles. The government hastily revised the guidelines to add aid to Ukraine to the list. With regard to drones, the government contends they are not subject to the restrictions because they are commercially available.

Even if the Japanese public supports providing equipment of this nature to Ukraine, it is hard not to be worried that this approach may be used to gradually widen the scope of Japan’s arms exports simply through revisions to the guidelines.

Only North Korea at the time of the Korean War and the Iraq during the Persian Gulf War fit the definition of a “state party to a conflict.” The Diet should engage in exhaustive debate on whether this definition is appropriate.

A set of security policy recommendations the ruling Liberal Democratic Party submitted to Prime Minister Fumio Kishida this week called for a review of the new three principles concerning defense equipment exports, in addition to giving the Self-Defense Forces the ability to strike targets in enemy territory.

The party has urged the government to consider a system to allow Japan to “transfer a wide range of defense equipment to a country subject to aggression that violates international law.” This proposal is apparently aimed at making it possible for Japan to provide deadly weapons of offense as well.

We cannot just accept such a serious policy shift that concerns the nation’s core pacifist principles.

This issue requires policymakers to engage in cool-headed debate from a long-term and comprehensive perspective while taking a hard look at the current international situation.