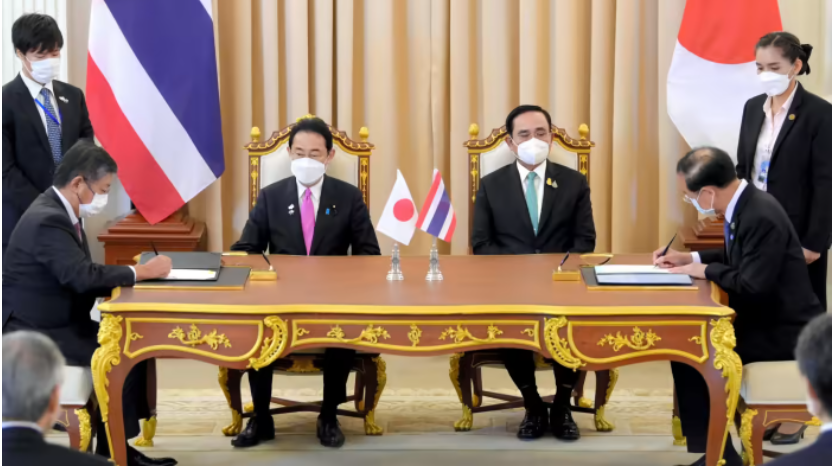 BANGKOK — Japanese Prime Minister Fumio Kishida on Monday held the last in a string of Southeast Asian summits aimed at helping to shape the international narrative on the conflict in Ukraine.

Kishida and Thai counterpart Prayuth Chan-ocha called for an immediate end to hostilities, along with humanitarian aid. Without criticizing Russia directly, they affirmed that unilateral attempts to change the status quo by force would not be tolerated and stressed the importance of international law on respecting countries’ independence, sovereignty and territorial integrity.

The leaders asserted their opposition to the threat or use of weapons of mass destruction. “We have called on all parties to end the violence and show the greatest possible restraint,” Prayuth said.

Tokyo hopes that the top-level diplomatic drive will move the needle on Southeast Asian leaders’ views toward Moscow. This approach is of a piece with the West’s focus on persuasion in its response to the Ukraine invasion, starting with the U.S. publicizing intelligence on Russia’s plans in order to win support for Kyiv and avoid holes in its sanctions regime.

Kishida and Prayuth agreed to work together in the South China Sea, where China has been building up its military presence — a situation that, similar to the Ukraine conflict, is seen as a threat rooted in the military and economic might of Beijing and Moscow, respectively.

Tokyo and Bangkok on Monday signed an agreement to enable transfers of defense equipment and technological cooperation, a move expected to help build trust between Japan’s Self-Defense Forces and the Thai military.

Thailand and other Southeast Asian countries have traditionally sought to strike a balance among major global powers. Since Russia launched the war in Ukraine, many have avoided criticizing Moscow and kept their distance from the Western-led sanctions campaign.

Vietnam and Laos have both abstained from voting on United Nations resolutions to condemn Russia’s actions and to deplore the humanitarian consequences of the invasion.

Tokyo explained the significance of the coalition against Moscow at summits in Japan with the leaders of Cambodia and Laos on April 23, as well as at summits in Indonesia on Friday and in Vietnam on Sunday. While the reception varied from country to country, each agreed on the need for a cease-fire and humanitarian support.

These efforts have been propelled by the prospect of practical economic and security cooperation.

The two sides previously signed an agreement on defense equipment transfers last September. “There were positive comments from the other side about moving forward with discussions on concrete steps,” Kishida said after Sunday’s meeting with Vietnamese Prime Minister Pham Minh Chinh.

The tour reflected hopes by the U.S. and other major powers to counter growing Chinese influence in Southeast Asia. Tokyo had to make some compromises in dealing with countries with close ties to Beijing and Moscow, as shown by the fact that Kishida made almost no mention of such values as freedom, democracy and the rule of law.