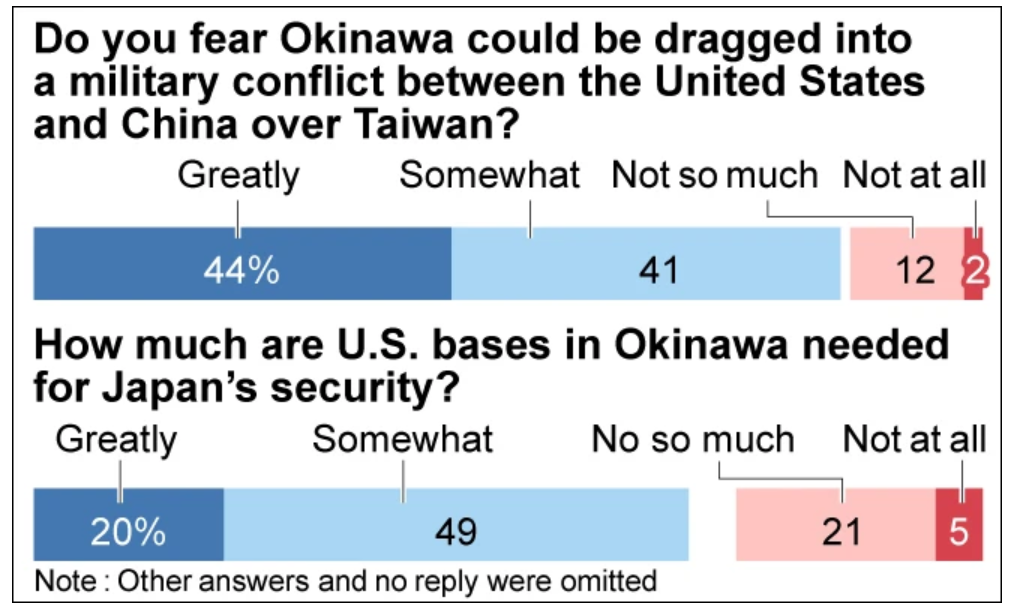 Eighty-five percent of Okinawans are worried that their island prefecture could be dragged into a military conflict between the United States and China over Taiwan, according to a survey.

Forty-four percent of the respondents said they “greatly fear” such a scenario, considering Okinawa Prefecture hosts around 70 percent of U.S. military facilities in Japan. Forty-one percent were “somewhat fearful.”

The survey was conducted on randomly selected eligible voters in Okinawa Prefecture by The Asahi Shimbun, The Okinawa Times and Ryukyu Asahi Broadcasting Corp. from March to April.

It was the first such survey to ask Okinawans about a possible contingency over Taiwan.

Other surveys have shown that Japanese are more worried about armed conflict in light of Russia’s invasion of Ukraine that started in late February.

Perhaps reflecting those concerns, the Okinawa survey found that 69 percent of respondents feel the U.S. military bases in the prefecture are needed for Japan’s security, including 20 percent who said they are “greatly necessary.”

Of the respondents who “greatly fear” Okinawa becoming embroiled in a conflict over Taiwan, 25 percent said U.S. bases on Okinawa are greatly necessary for Japan’s security, higher than the overall ratio.

Still, 63 percent of respondents were in favor of relocating some U.S. bases to other prefectures to ease the burden on the southernmost prefecture, while 27 percent were against such moves.

In the 2002 telephone survey, 48 percent supported base relocations to outside Okinawa Prefecture while 40 percent were opposed.

The most common choice was territorial dispute, at 31 percent.

China has conducted aggressive maritime activities around the Senkaku Islands, which are controlled by Japan as part of Okinawa Prefecture.

The second most common answer was military buildup, cited by 27 percent, followed by strong economic power, at 18 percent.

Of the respondents who were most concerned about China’s arms buildup, 54 percent said they “greatly fear” Okinawa being dragged into the contingency over Taiwan.

Seventy-seven percent of the respondents said Japan’s bilateral relations with the United States are more important than its ties to China, compared with 7 percent who felt the Japan-China relationship is more important.

The survey was conducted by mailing questionnaires to 2,000 randomly chosen eligible voters in the prefecture. Valid responses were collected from 1,218, or 61 percent.