How ‘transitory’ is Japanese inflation?

TOKYO — For over a year, the Federal Reserve insisted that the rise in U.S. inflation was “transitory,” while evidence mounted to the contrary. It dropped the claim in November and the word is now a punchline for critics of the central bank, who say it should have acted to tame prices sooner.

Cross to Japan, where inflation this year is expected to hit 2% after three decades of basically no rise at all. Bank of Japan Gov. Haruhiko Kuroda last month sounded a lot like his opposite at the Fed, Jerome Powell, when he told the Japanese parliament he would stick to his loose monetary policy.

“There is no need to tighten monetary policy in response to a transitory trend, as opposed to a sustained one,” Kuroda said. The latest figures, due Friday, are a key focus for market players this week. According to 10 economists polled by Nikkei, core inflation, which in Japan excludes prices for fresh food, is forecast to rise to 2% in April from 0.8% in March amid global commodity shortages following the COVID pandemic and the Russian invasion of Ukraine.

Hitting 2% is a key policy goal of the BOJ as it tries to lift the nation out of deflation, but the central bank and most private-sector economists predict that it will be short-lived and that Japan will return to disinflation. They point to persistently weak wage pressure in Japan, and the legacy of deflation, which has deeply affected how people react to the price rises they do see.

Average wages increased only 0.3% last year, according to a labor ministry survey, as annual negotiations involving large corporations yielded a wage increase of only 1.86% — falling short of 2% for the first time in eight years. Both the BOJ and most private-sector economists expect only a gradual increase. The BOJ predicts that core inflation will average 1.9% in fiscal 2022, then retreat to 1.1% in fiscal 2023 and 2024.

“Disinflation is so deeply ingrained in Japan that the household sector tends to react defensively to price increases by reducing consumption,” says Ryutaro Kono, chief Japan economist at BNP Paribas in a research note. “Businesses, for fear of losing sales, avoid price hikes at the expense of employee wages or profit margins.” 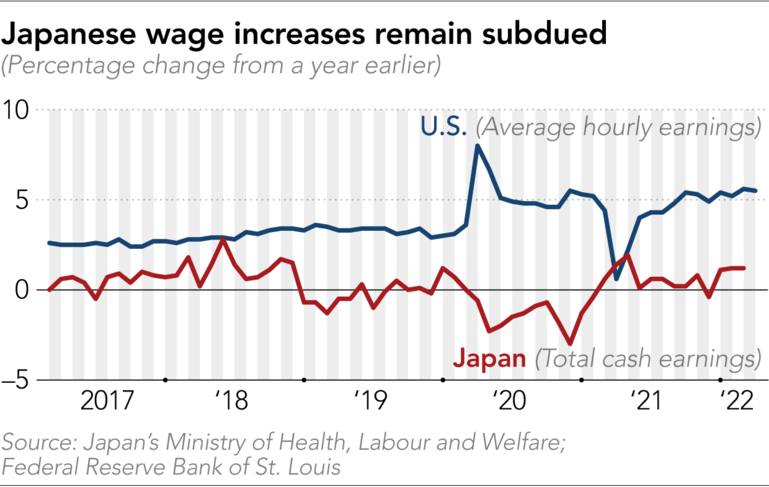 Private-sector economists on average forecast that inflation will peak at 2.2% in October, then will slip below 2% in January-March. For fiscal 2023, they predict inflation of 0.8% on average.

But there are economists who are not so sure about the transitory nature of the current increase.

In Japan, producers are not as shy as before about raising prices. Cost increases are too large for them to absorb, with producer prices up 9.5% in March, and price hikes have never looked so justifiable as they are today. Even Japanese consumers are beginning to accept them — to an extent.

Food and energy have been the first to go up. Take flour, for example. Flour prices are regulated in Japan and set by the government biennially in April and October. In April, they were raised 17% but the increase only partially accounted for the impact of the Russian invasion that started on Feb. 24. Another hike is expected in October.

“There are many products that are made from wheat, such as bread and noodles, and their prices will go up further in autumn,” says Yoshiki Shinke, economist at Dai-ichi Life Research Institute. Japanese noodle makers such as Nissin Food Products and Toyo Suisan are scheduled to raise the prices of their instant noodles by 5% to 12% on June 1. “It is difficult to predict how far price hikes will spread,” Shinke said. “The risks are to the upside.”

Utility prices, such as gas and electricity, are also expected to increase toward summer. Utility prices are adjusted to commodity prices with a lag of three to five months in Japan. A spike in both oil prices and the U.S. dollar since March will start being reflected in utility bills between June and August.

Price hikes are expected to spread beyond food and energy. Consumer durables, such as refrigerators, are the prime example. “Nowadays, most Japanese appliances are produced overseas and imported to Japan. They involve a lot of transport costs,” says Hiroshi Ugai, chief Japan economist for JP Morgan.

“Consumers are better able to withstand price increases this year because they have saved more than they wanted to in the last year and a half,” he said.

The savings rate in Japan jumped during the COVID pandemic to 12% in 2020 and 10% in 2021, compared with around zero for much of the past decade. “Due to COVID restrictions, consumers weren’t able to go out and spend if they wanted to,” Ugai said. The pent-up savings are likely to provide a cushion against price hikes and could help sustain inflation, he predicts.

The weak yen could also muddy the picture.

Import price inflation has been exacerbated as the yen has tumbled against the dollar — 12% year to date and 17% year on year. Global investors have been attracted by the higher yields offered by the U.S. as the Fed embarked on monetary tightening at an unprecedented speed to tame inflation there.

With the BOJ under Kuroda keeping monetary policy loose, the interest rate gaps are only widening, keeping downward pressure on the currency. Last Monday, the yen marked a fresh 20-year low against the dollar at 131.34. JP Morgan currently predicts a gradual decline to 133 by next March, anticipating half-point rate hikes by the Fed in June and July, and a quarter-point increase at every subsequent monetary policy meeting through March next year, with the policy rate eventually rising to 3.25%. Ugai says the yen could fall further if the Fed decides to be even more aggressive.

Takashi Miwa, chief Japan economist for Nomura, predicts that the yen’s decline is likely to run its course soon, however, since the rate hikes by the Fed will cool the economy and ease inflationary pressure. The yen will also be helped by expectations for tighter monetary policy in Japan after Kishida gets over a triennial upper house election in July, solidifies his power base, and starts charting a more independent economic policy from the Abenomics program of monetary and fiscal stimulus advocated by former Prime Minister Shinzo Abe.

“The market’s focus is on the next Fed meetings in June and July,” Miwa said. “Will the Fed go for two half-point rate increases, as widely anticipated, or a more aggressive 75 basis points increase?” he asks. “The meetings will mark a key milestone for the dollar-yen rate.”

JP Morgan’s Ugai said the market will be paying close attention to inflation through 2023 and 2024. “Will inflation revert to 1% next year or stay stronger?” he asked. “If it stays high, it would spur more wage increases and lead to more price hikes,” he said, making it a little more self-sustaining.