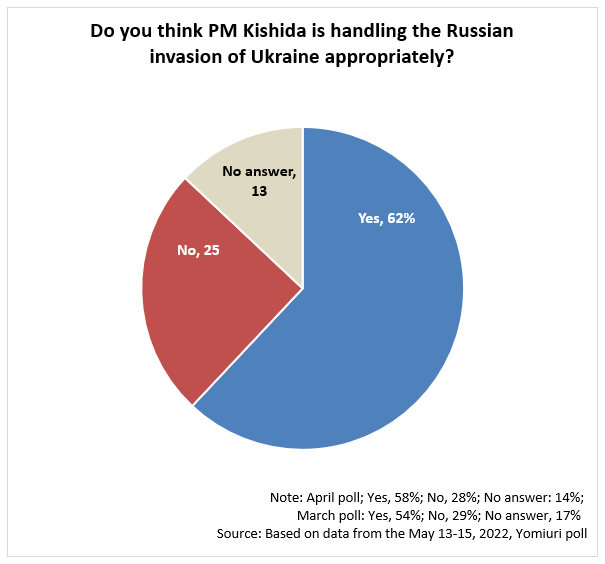 According to the Yomiuri nationwide public opinion poll conducted on May 13–15, support for the cabinet of Kishida Fumio rose to 63%, up 4 percentage points from the 59% found in the previous poll conducted on April 1–3. Nonsupport dropped from 29% in the April poll to 23% in the recent poll. The public gives high marks to Kishida for his handling of the Russian invasion of Ukraine and COVID-19. Even among those supporting opposition parties, support for Kishida was 56% (April poll, 40%) while nonsupport was 37% (53%).

Some 75% of respondents said that they approve of Kishida’s announcement that Japan will ban the import of Russian oil in stages. Some 62% of pollees said that they think Kishida’s handling of the Russian invasion of Ukraine is appropriate (April poll: 58%), up for the second month in a row [March poll: 54%].

Some 62% of respondents said that they approve of Kishida’s handling of COVID. This is the first time that the figure has surpassed 60% since the February 2020 poll, when the question was asked for the first time. Meanwhile, 44% said it is appropriate to limit the recipients of a fourth COVID vaccination to those age 60 or over and those age 18 or over who have a preexisting medical condition. Some 29% said that the scope of recipients should be broadened, while 22% said that a fourth vaccination is not necessary. Views were split, however, on the relaxation of entry restrictions on foreigners, which the government is considering, with 51% saying they back the idea and 41% saying they are against it. If COVID cases rise, Kishida may face criticism. 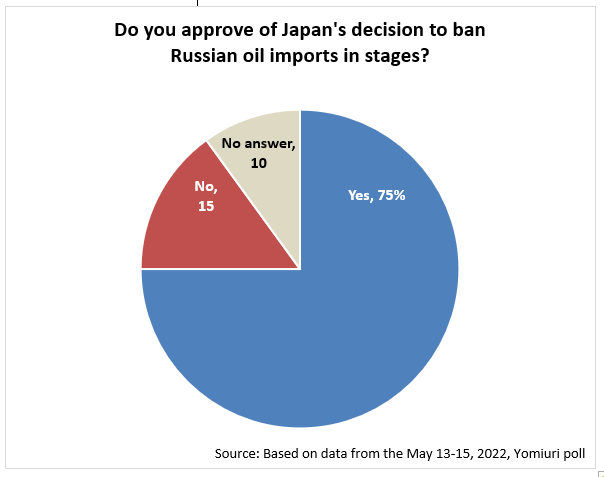 A total of 86% of respondents said they are concerned that the rise in commodity prices driven by the appreciation of the yen will make it hard for them to make ends meet, with 37% saying they are “very concerned” and 49% saying they are “somewhat concerned.” Views were split on whether the Bank of Japan should continue its monetary easing policy, with 40% backing the continuation of the policy and 40% not.