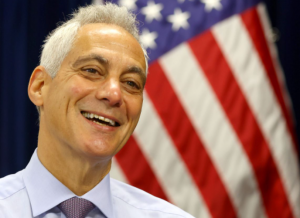 Sankei gave top play to its one-on-one interview with U.S. Ambassador to Japan Emanuel. The paper wrote that the Ambassador noted that President Biden will announce during his trip to Japan starting on May 22 the strengthening of U.S.-Japan cooperation in space and healthcare. The paper also said the Ambassador expressed the view that China will not be invited to join the U.S.-led Indo-Pacific Economic Framework (IPEF). According to the daily, this was the first one-on-one interview the Ambassador has granted to a major Japanese newspaper since his arrival.

The paper wrote that Ambassador Emanuel stated during the interview that one of the major deliverables of President Biden’s visit to Japan, including his summit meeting with Prime Minister Kishida, will be U.S.-Japan cooperation and coordination in space. He expressed the United States’ intention to step up cooperation with Japan in gathering information in outer space. Concerning IPEF, whose launch is expected to be announced by President Biden in Tokyo, the Ambassador said the basic premise of the framework will be to abide by agreed-upon rules regardless of the participants’ size or the strength of their economies. The Ambassador said China is not said to be following rules and is not envisioned as a participant in the framework. Referring to IPEF as a tool for economic diplomacy, the Ambassador expressed the United States’ intention to strengthen its ties with Indo-Pacific nations.

The Ambassador also stated that in response to Russia’s invasion of Ukraine, President Biden and Prime Minister Kishida are trying to coordinate with nations in Europe and Asia to employ an integrated strategy and that collaboration between the two leaders is working well. Concerning Japan’s sanctions on Russia, the Ambassador said Japan has been making decisions very quickly and that President Biden values these decisions highly. The Ambassador added that it is necessary for the United States and Japan to deepen their economic and security relations with their allies and make efforts to win ASEAN and island nations over to their side to confront with such dictatorships as China and Russia. Noting that President Biden will have lunch and dinner with Prime Minister Kishida while he is in Tokyo, the Ambassador expressed hope that the two leaders will further deepen their relationship of trust through a series of dialogues.

The paper also ran an extensive inside-page report on the interview. Concerning the U.S.-Japan Alliance, the paper wrote that the Ambassador said major progress would be possible for the bilateral relations if President Biden and Prime Minister Kishida remain in leadership for a few more years, pointing out that the conditions for the United States and Japan to deepen their relations and alliance are favorable today because they currently have no issues of conflict on the economic and security fronts.

On IPEF, Ambassador Emanuel commented that the initiative is aimed at bringing sustainability and stability to economic activities in the region. The paper speculated that the United States is trying as a permanent Pacific power to establish a new economic order based on international rules and norms vis-à-vis China’s hegemonic activities. The Ambassador said Washington decided to launch a new economic framework because the global economic environment has drastically changed due to the coronavirus pandemic and Russia’s invasion of Ukraine. 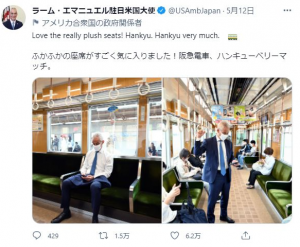 The paper also carried a profile of the Ambassador, noting how he walked to the Kantei, rides the train, eats at local restaurants, and visits local markets and cafes in Japan. The daily quoted him as saying he prefers to interact with ordinary Japanese to experience Japan’s rich culture and diverse society than staying in the shell of security protection. The paper also highlighted the Ambassador’s active use of Twitter, mentioning his tweets on train rides in Tokyo and Osaka and on Russia and China. The Ambassador reportedly told the paper he was impressed with the enthusiasm of the 16 young people he met in Okinawa last month about their plans to study in the United States. The Ambassador was quoted as saying they reminded him that the United States and Japan are connected not only by their alliance relations but also by friendship.