When the Cabinet of Prime Minister Fumio Kishida was launched in October, the skies were turbulent, as it boosted the lowest initial approval rating for a new Cabinet in the past two decades.

However, the Cabinet’s approval rating has risen and is tied for the second highest in recent decades some six months later, according to an Asahi Shimbun survey.

The Kishida administration has been buoyed by public support that is both broad-based but tenuous. Trends of voters with no particular affiliation to political parties, in the meantime, could hold the key to the Cabinet’s successful path forward.

Leadership has emerged as a weak point for Kishida, whose handling of the economy, including rising commodity prices, could present an Achilles’ heel for his administration.

The Cabinet’s approval ratings have remained about the same among both men and women, unlike in the case of the long-lived administration of Shinzo Abe in his second stint as prime minister (2012-2020).

A national survey taken by The Asahi Shimbun Co. on April 16 and 17 showed the approval rating for the Kishida Cabinet at 55 percent.

Only three of the 10 administrations that took power after the newspaper began conducting similar surveys by phone in 2001 had an approval rating in excess of 50 percent six months into their existence.

The approval rate six months following the ascension to power was 71 percent for the Koizumi Cabinet (2001-2006), 55 percent for Abe’s Cabinet in his second stint, and just as high for Kishida’s.

The Kishida Cabinet set out with an initial approval rating of only 45 percent six months earlier, which was the lowest of the past two decades and replaced the previous low of 48 percent for the Cabinet of Prime Minister Taro Aso (2008-2009).

In an unusual trend, however, the approval rating for the Kishida Cabinet has been on the rise during the first six months of its existence.

The seven previous administrations, except Koizumi’s and Abe’s second, saw drops in their approval rating during the first six months they were in power. The corresponding figure, for example, plummeted from 65 percent to 40 percent under the penultimate administration of Prime Minister Yoshihide Suga (2020-2021), and that was not among the most prominent drops.

When The Asahi Shimbun was conducting surveys through in-person interviews, the results found the Cabinet of Prime Minister Toshiki Kaifu (1989-1991) rising in approval from the initial 39 percent to 49 percent six months later.

That evokes similarity to the Kishida Cabinet, although no simple comparison is appropriate.

The approval rating for the Kaifu administration further rose to 56 percent 10 months into its existence and remained as high as 50 percent two months before it stepped down after two years in power.

The Kishida Cabinet is characterized by a relatively high approval rate among women.

The Koizumi administration was highly popular among women when it started out. An Asahi Shimbun survey conducted the following month showed the approval rating at 87 percent among women, which outstripped the 81 percent for men.

Under the administration of Abe during his second stint, by comparison, it sometimes appeared that women were withdrawing their support for the Cabinet because of mudslinging in the Diet, scandals surrounding the prime minister and other negative factors.

The tit-for-tat battles in the Diet included those over Japan’s self-imposed ban on the right to exercise collective self-defense, which the Abe Cabinet lifted in 2014, and the so-called anti-conspiracy law, which was enacted in 2017.

The Kishida Cabinet has possibly maintained its support among women partly because it has given no impression of high-handedness in its policy decisions, handling of Diet affairs and other matters, and partly also because no scandals have surfaced surrounding the prime minister himself. 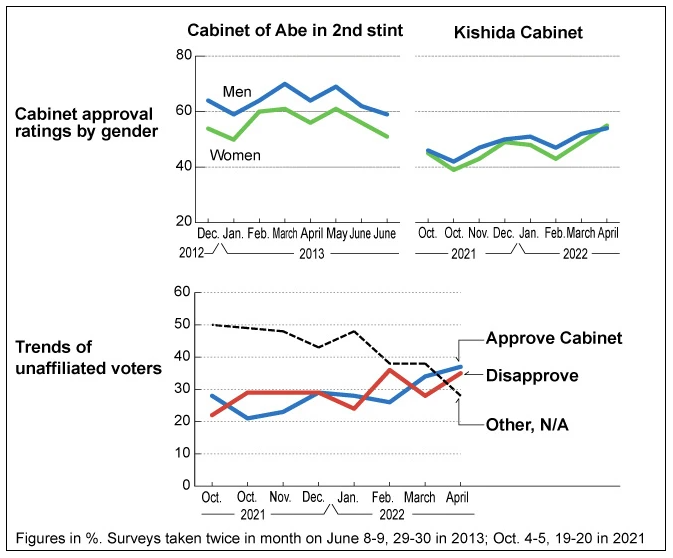 The Asahi Shimbun’s April survey asked respondents what they think of Kishida’s manner of offering responses in the Diet and at news conferences. Only 4 percent of the respondents said they “have great sympathy,” but more than half, at 53 percent, said they “have a certain degree of sympathy.”

The sympathy levels were about the same for both men and women.

And the sympathy for Kishida even came from the majority of those who support opposition parties. More than half of the supporters of the Constitutional Democratic Party of Japan and of Nippon Ishin (Japan Innovation Party) said they have “a certain degree of sympathy” in Kishida’s way of offering responses.

When the approval rate for the Kaifu administration, which likely followed a similar trend, reached its peak, 49 percent of the respondents to The Asahi Shimbun’s survey said they had favorable feelings for Kaifu, slightly exceeding the 43 percent who said they didn’t have a favorable impression.

Even members of the opposition of the time commented that Kaifu gave an “impression of being sincere” and had an “air of being somehow likable.”

High ratios of “I don’t know” (DK) and “no answer” (N/A) responses have also characterized the approval and disapproval ratings for the Kishida Cabinet.

The DK and N/A responses initially totaled 35 percent when the Kishida Cabinet was starting out, beating the previous record of 29 percent for the just inaugurated Cabinet of Prime Minister Yoshihiko Noda (2011-2012), the highest in the past two decades.

This shows that many members of the public find it difficult to rate what the Kishida Cabinet is doing and what it is planning to do. And that is the flip side of Kishida’s weakness in his ability to send out messages.

Six months into existence, the Kishida Cabinet saw its DK/NA rate drop to only 16 percent, about as low as the corresponding figures for the other administrations.

The Asahi Shimbun’s surveys have shown more than 40 percent of eligible voters have no particular political party to support. The DK/NA rate for the Kishida Cabinet among those unaffiliated voters dropped from the initial 50 percent to only 28 percent in April.

But the unaffiliated voters appear neutral as a whole in their stance toward the Cabinet, with an approval rating of 37 percent and a disapproval rating of 35 percent. It therefore remains worthwhile to keep watch over their trends.

The Asahi Shimbun surveys have asked respondents to choose from four responses as to why they approve or disapprove of the Cabinet.

During the April survey, the largest chunk of those who said they approve of the Kishida Cabinet, at 55 percent, said they do so because his Cabinet “appears to be a better choice.”

That ratio is not outstandingly large, although it outstrips the average of 50 percent for the corresponding figures under the Suga Cabinet.

Worth more attention are the grounds for disapproving the Cabinet.

When the Kishida Cabinet had just started out, only 14 percent of those who said they disapproved of it cited “reasons of policy.” That ratio shot up to 46 percent in the April survey. 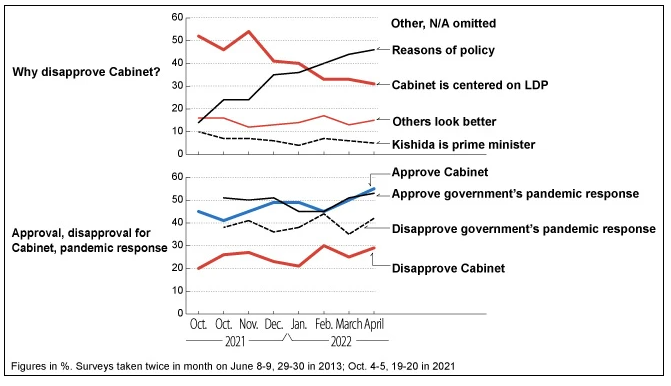 The survey found that men are less supportive. The corresponding ratio was 53 percent for males and 39 percent for females.

Of the policies that are proving troublesome, the novel coronavirus pandemic has remained one of the top issues over the past two years.

During the April survey, 53 percent of the respondents said they approve of the government’s response to the pandemic, exceeding the 42 percent who said they do not approve of it. The corresponding figures in March were 51 percent approval and 35 percent disapproval.

The public rating of the government’s COVID-19 response has tended to be correlated with public approval and disapproval for the Cabinet in power. Approvers of the pandemic response have consistently outnumbered disapprovers under the Kishida administration.

In the surveys taken in January, February and April, however, the majority of the respondents said they don’t believe that Kishida has “shown leadership” in fighting the pandemic, which rose from 41 percent in January to 54 percent in April.

Some 86 percent of the Kishida Cabinet disapprovers don’t think that the prime minister has exercised leadership in COVID-19 countermeasures.

When Kishida was sworn in as prime minister, 42 percent of the respondents said they had “high expectations” for his economic policy, the centerpiece in his agenda, in excess of the 28 percent who said they had “low expectations.”

During the April survey, 32 percent of the respondents said they approve of Kishida’s response to the rise in commodity prices, with 53 percent saying they disapprove of it. As many as 75 percent of the Cabinet disapprovers said they negatively view the prime minister’s reaction to the surge in prices.

The most recent survey shows that the Kishida Cabinet may be keeping afloat, for the time being, by its soft image. However, public support could fall if it were to remain weak in making appeals to the public on the policy front.