The San Diego-based carrier will enter the base, which sits south of Tokyo and is home to the USS Ronald Reagan carrier, with a crew of 4,779, according to the city of Yokosuka.

The docking comes a day ahead of the arrival of U.S. President Joe Biden, who will stay in Japan until Tuesday. While the city has been told that the purpose of the port call is “rest, replenishment and maintenance,” the carrier’s presence is thought to demonstrate the Navy’s flexibility in rotating ships in and out of Japan, Washington’s most important Asian ally.

The ship will replace the Ronald Reagan, which on Friday headed out for summer patrol with a crew of 2,817 aboard.

The visiting carrier will park at Piedmont Pier (Berth 12), which is usually reserved for the Ronald Reagan.

The Yokosuka-based Ronald Reagan typically leaves and returns to its home port without its air wing, which is based in Iwakuni, Yamaguchi Prefecture. The air wing joins the carrier at sea.

The Abraham Lincoln, meanwhile, will enter Yokosuka with its full air wing on board, which is rare and the reason for the massive crew. 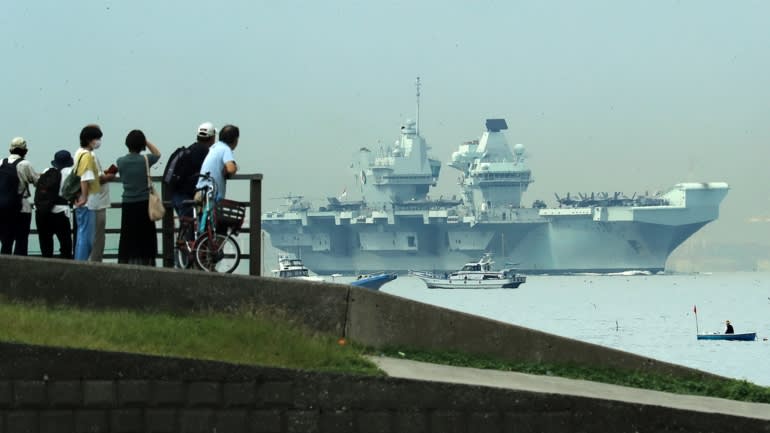 The HMS Queen Elizabeth leaves Yokosuka Naval Base in September 2021 after making a rare port call in Japan. (Photo by Makoto Okada)

In September, the British aircraft carrier HMS Queen Elizabeth made a port call to Yokosuka and parked at Pier 12 during its maiden operational voyage.

The port call was widely thought to be a message to China: Not only American carriers but also British carriers could be replenished and repaired at a Japanese port.

The Abraham Lincoln is commanded by Capt. Amy Bauernschmidt, the first woman to serve as the commanding officer of a U.S. Navy aircraft carrier.

Its entry into Yokosuka Port will occur at 8:55 a.m., according to the Japan Coast Guard’s Tokyo Bay Vessel Traffic Service Center.

The length of the stay has not been announced. The crew is permitted to leave the base on the condition they wear face masks and adhere to COVID-19 protocols.

Since last summer, the Navy has been gathering its newer ships — equipped with helicopter hangars — at Yokosuka with the aim of strengthening anti-submarine capabilities.