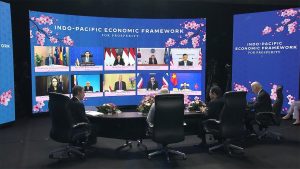 All national dailies reported that President Biden delivered a speech in Tokyo on Monday, during which he announced the launch of the new Indo-Pacific Economic Framework (IPEF). The papers said the new economic framework will begin with 13 inaugural members—the United States, Japan, India, South Korea, Australia, Indonesia, Thailand, Singapore, Malaysia, the Philippines, Vietnam, New Zealand and Brunei—which account for about 40% of the world’s GDP. The IPEF will focus on fair and resilient trade, supply chain resilience, infrastructure and clean energy, and taxes and anti-corruption, with the aim of building a new economic order to counter China. The dailies highlighted the following remarks by the President: “We are writing the new rules for the 21st century economy. We are going to help all of our countries’ economies grow faster and fair…. The key to our success will be the framework’s emphasis on high standards and inclusivity.” Mainichi said Prime Minister Kishida and Indian Prime Minister Modi attended the launch event in person and ten other leaders attended the event virtually. Meanwhile, Sankei wrote that China is reacting sharply to the move by calling it “an attempt to isolate” China.

In a related story, Yomiuri and Sankei wrote that Keidanren Chairman Tokura held a press conference on Monday and welcomed the launch of IPEF, which focuses on a wide range of economic issues, such as digital economy, supply chains, and climate change. He also reportedly expressed hope that the United States will return to the TPP by saying: “This will serve as a steppingstone for the United States to return to the TPP.” Meanwhile, Keizai Doyukai chief Sakurada released the following comment: “We hope to lead the rulemaking [for IPEF] and play a role in increasing the number of participating nations, including in Asia.”