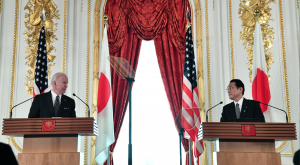 All national dailies highlighted President Biden’s remark during a joint press conference that the U.S. military would defend Taiwan if China invaded it. When asked by a reporter whether the United States would be willing to get militarily involved in a Taiwan contingency, the President reportedly said: “Yes. That’s the commitment we made.” Yomiuri wrote that the President’s remark signified a departure from the U.S. policy of “strategic ambiguity” toward Taiwan, noting that this is bound to cause a stir. The paper quoted a White House official as saying: “Our policy remains unchanged. The President emphasized our responsibility over peace and stability in the Taiwan Strait.” Meanwhile, the dailies wrote that the President also said the United States’ One China policy remains the same and it remains committed to supporting peace and stability across the Taiwan Strait.

Yomiuri speculated that the President’s remark on Taiwan was aimed at keeping China in check and dispelling the concerns that have spread among the U.S. allies following Russia’s invasion of Ukraine. Noting that the President also mentioned the U.S. commitment to the defense of Taiwan in August and October last year, after which USG officials had to clarify that the U.S. policy remained unchanged, the paper said the GOJ views the President’s latest remark as “a clear manifestation of the U.S. policy of attaching importance to Taiwan,” according to a senior MOFA official.

In related stories, all national dailies wrote that China’s Foreign Ministry spokesman Wang Wenbin commented on President Biden’s remarks on the United States’ commitment to defending Taiwan by saying: “China expresses strong dissatisfaction with and firm opposition to the remarks. The Taiwan issue is purely an internal affair of China and cannot be interfered in by any external forces. China will take firm action to safeguard its sovereignty and security interests.” Meanwhile Taiwan’s Ministry of Foreign Affairs released a statement saying that Taiwan welcomes and deeply appreciates President Biden’s remarks.