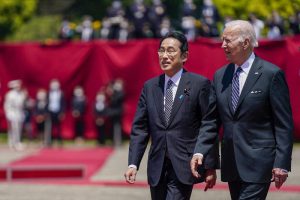 All national dailies and broadcasters gave extensive top coverage to the summit between President Biden and Prime Minister Kishida at the Akasaka Palace that lasted for more than two hours on Monday, after which they issued a joint statement in which they agreed to “work together to strengthen deterrence.” Yomiuri wrote that the two leaders agreed on the need to swiftly strengthen the deterrence and response capabilities of the U.S.-Japan Alliance amid concerns that Russia’s invasion of Ukraine may prompt China to step up its hegemonic actions in East Asia. Prime Minister Kishida expressed his intention to fundamentally boost Japan’s defense capabilities and substantially increase its defense budget. The premier also reportedly conveyed to the President his plan to host next year’s G7 Summit in Hiroshima.

Nikkei wrote that even though the United States is busy supporting Europe following Russia’s invasion of Ukraine, the two leaders were able to confirm continued U.S. engagement in East Asia on both the security and economic fronts. Mainichi wrote that the two leaders reaffirmed that no attempt to change the status quo by force can be accepted anywhere in the world and that the international community, including the G7, will respond resolutely. They also agreed to closely monitor China’s moves and strongly opposed any unilateral attempt to change the status quo in the East or South China Seas. In view of China’s buildup of its nuclear forces, the two leaders also agreed to step up talks on extended deterrence, including U.S. nuclear forces. In addition, the premier reportedly said the two leaders agreed that the two nations will hold even closer communications, including at the ministerial level, to ensure that extended deterrence remains rock solid.

Nikkei reported that the joint statement called on China to increase its nuclear transparency and said that the two nations will work together to “strengthen deterrence.” The paper noted that the language in this section was upgraded from the wording in their joint statement released in April 2021 that said they “acknowledged” the importance of deterrence. On North Korea, the two leaders shared deep concern over its nuclear and missile programs and agreed that the United States, Japan, and South Korea will work together closely. The President also promised that he will support Japan’s bid to become a permanent member of the UN Security Council if the UNSC is reformed. The two leaders also agreed to launch an economic version of the “2+2” meeting in July, the paper said.