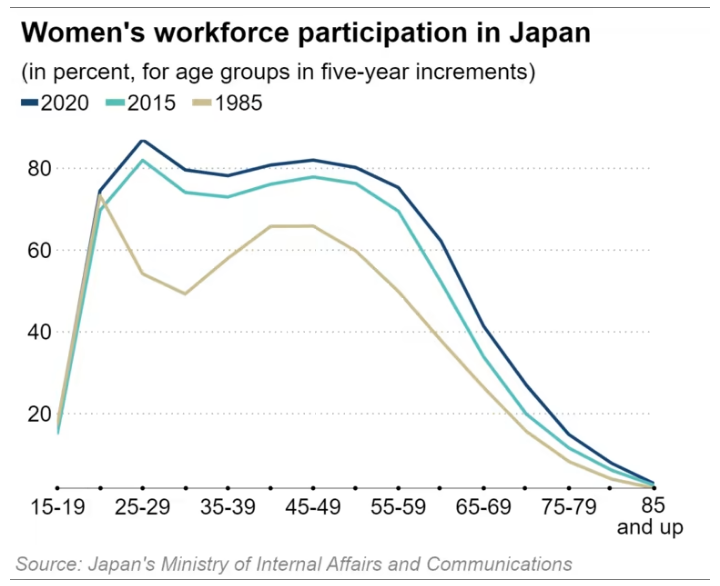 TOKYO — Women in their 30s in Japan continue to make progress in workforce participation, greatly flattening their once-pronounced M-shaped dip stemming from pressure to quit jobs and become stay-at-home mothers.

Among the working-age population, which starts at age 15, the percentage of women employed or actively looking for work has historically veered sharply lower for those in their 30s compared with women in their 20s or 40s.

Japan’s M-shaped curve had been conspicuously deeper than comparable graphs for other countries, shining a harsh light on the issues faced by women in the labor environment here.

Current numbers for 30-somethings are approaching those for 25- to 29-year-old women, who are benefitting from an increase in hiring. Among the latter cohort, 87% are in the labor force — rising 5 points between 2015 and 2020.

Fueling the near-collapse of the M-curve is the larger number of businesses offering parental leave. This has created workplace conditions that are more welcoming to working mothers.

Women who take parental leave are also counted among those actively participating in the workplace. More women have chosen to take a temporary break, then return to their jobs.

In addition, a large number of women who decided to resign permanently upon having children are returning to the workplace after their kids have grown older.

Thanks to the increased share of women workers in their 30s, Japan’s overall female workplace participation rate rose 3.4 points from 2015 to 54.2% in 2020.

Yet issues linger regarding what types of work women do.

Only 42.4% of working women are employed in a regular capacity — well below the 65.2% share for male workers and only slightly above female part-timers’ share of 41.5%.

Nonregular workers typically earn less than regular employees. Cash earnings of part-timers averaged about 100,000 yen ($786 at current rates) a month in 2021, according to the Japan Institute for Labor Policy and Training.

This is around a quarter of the roughly 420,000 yen figure for full-time workers. Women’s larger share of part-time jobs has contributed to the gender gap in pay.

“Companies need to offer more flexibility in order to encourage women to return to permanent positions, like four-day workweeks or teleworking,” said Takuya Hoshino of the Dai-ichi Life Research Institute.

Assistance in child care is important as well. To help keep women in the workforce, Japan passed legislation in June 2021 entitling men to four weeks off within eight weeks of birth. The law began taking effect in stages this April.

But attitudes in the workplace remain an obstacle. In a 2021 survey by the Cabinet Office, 42.2% of married male respondents in their 20s and 30s said they were not planning to take parental leave, outnumbering the 39.4% who were.

The top two barriers keeping men from taking a month or more off were not wanting to inconvenience colleagues, at 42.3%, and their workplaces not appearing open to the idea, at 33.8%.