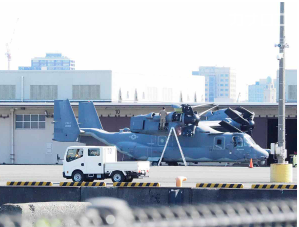 U.S. Osprey transport aircraft were parked at the Yokohama North Dock U.S. military facility located in Yokohama City’s Kanagawa Ward, it was learned on June 2 . At least three Ospreys were seen parked outside the facility, but both the prefectural and city governments explained that they had “not been informed” and reportedly contacted the Ministry of Defense for confirmation. According to a source close to the matter, the aircraft were CV-22s affiliated with Yokota Air Base (Tokyo), and the purpose and duration of their presence there remain unknown.

According to the civic group Rimpeace, which monitors U.S. bases in Japan, two of the three aircraft took off from the Yokohama port and landed at the very end of the pier on the afternoon of June 2. In the evening it was found that the three planes were parked alongside each other at the pier with their wings folded.

“The North Dock is neither an airport nor a heliport,” says Kaneko Tokio, co-representative of the civic group. “We’ve never heard of an Osprey landing there. This is problematic because the local government did not receive any advance notice.”

Five Ospreys slated to be delivered to Yokota Air Base were unloaded at the North Dock in 2018. In January 2020, one Osprey was found parked there. An Osprey being unloaded from a transport vessel was also sighted In June 2021.