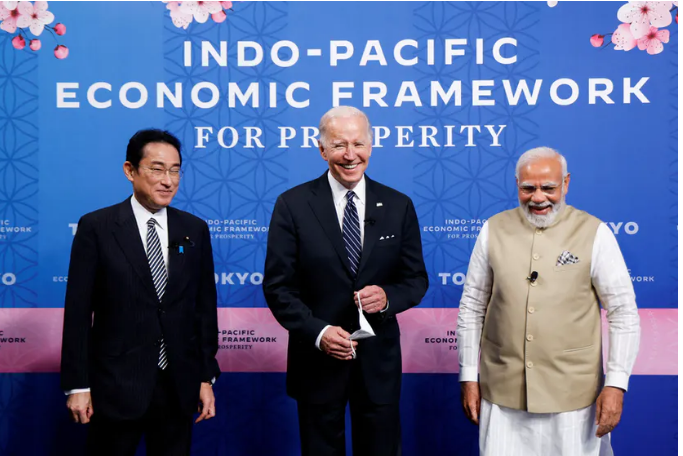 The Indo-Pacific Economic Framework (IPEF), a new economic bloc initiative led by the U.S., has moved forward. Currently, 14 countries, including Japan, the U.S., South Korea, and India, have announced their participation in the IPEF to cooperate in rebuilding supply chains (supply networks) and creating rules for digital trade.

Many are negative about a framework that does not include measures for trade liberalization, such as the reduction or elimination of tariffs. However, we give high marks to the U.S. for its economic involvement in the region.

The IPEF is aimed at creating rules in four areas: supply chains, digital trade, decarbonization, and anti-corruption. It will facilitate cross-border logistics and data movement, promote technical cooperation in the energy sector and the sharing of information on tax affairs.

The U.S. also aims to create a group of partners to counter China. In 2017, the U.S. Trump administration withdrew from the Trans-Pacific Partnership (TPP) Agreement, which was initiated by the U.S.

Subsequently, China took the lead in the effectuation of the 15-nation Regional Comprehensive Economic Partnership (RCEP) in East Asia, and also applied for membership in the TPP.

The U.S. involvement in the Indo-Pacific through the IPEF reinforces a rules-based economic order and curbs the spread of Chinese-style state capitalism.

The TPP was launched without the U.S. It is particularly significant that India, South Korea, and Indonesia, which have not yet joined the 11-member TPP, have announced their participation in the IPEF.

The [IPEF] framework without trade liberalization has been criticized by many, but within the U.S., the decline of the manufacturing industry and widening economic disparities have led to growing dissatisfaction with globalization. Under the circumstances, the U.S. is not ready to commit itself to market opening.

While encouraging the U.S. to return to the TPP, it is realistic to first use the IPEF to help stabilize and develop the regional economy.

Southeast Asian countries, on the other hand, are concerned that the IPEF will become a “litmus test” of which side they are on, the U.S. side or the Chinese side. There is also a deep-seated sense of caution that the IPEF will impose excessive obligations on these countries in the absence of “benefits” such as expanded exports to the U.S. market.

We want Japan to undertake a difficult task in this regard. As the details of the IPEF are fleshed out, Japan should explain the current economic relationship between China and Southeast Asian countries to prevent an excessively wide gap between them.

The attractiveness of the IPEF should be widely trumpeted. Depending on the details of digital trade rules, they [the rules] can help companies in the [Indo-Pacific] region to develop markets outside the region. Diversification of supply networks and decarbonization efforts could also attract investment in participating countries.

Although the IPEF is an initiative launched under the pressure of necessity amidst the struggle for hegemony between the U.S. and China and the headwinds facing free trade, there is potential to develop the framework into beneficial one. We hope that the participating countries will have the wisdom to do so.