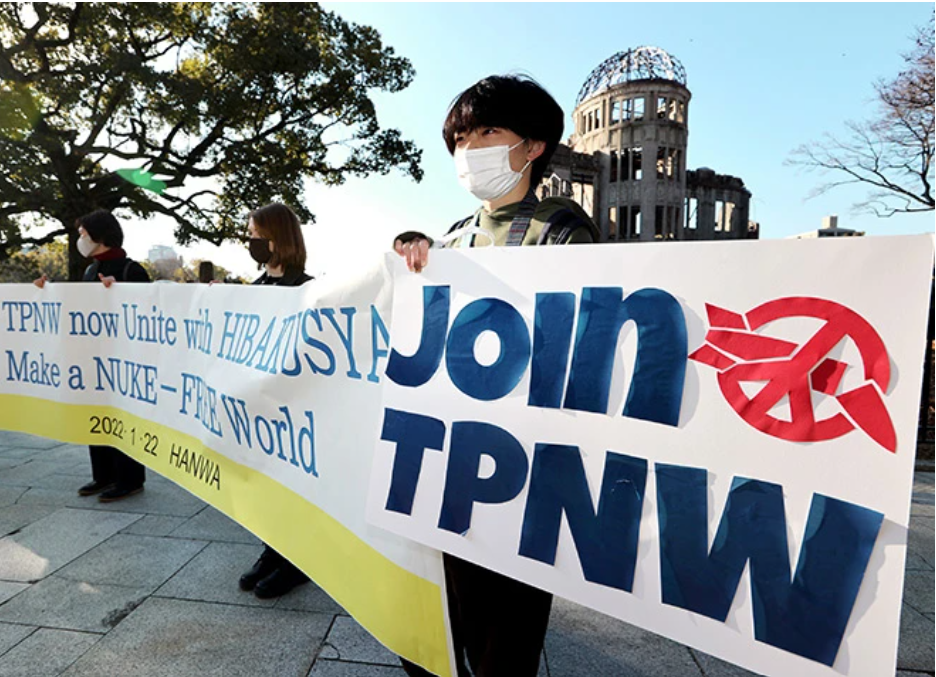 Standing against the backdrop of the Atomic Dome in Hiroshima in January, citizens call on the government to join the Treaty on the Prohibition of Nuclear Weapons. (Asahi Shimbun file photo)

Nuclear weapons must never be used. The international community must stand as one and make this plea. The urgency has never been greater than it is now.

As the only nation to have experienced atomic warfare, Japan’s mission is to lead the way.

The first meeting of the signatories to the Treaty on the Prohibition of Nuclear Weapons will be held in Vienna late this month against the backdrop of Russia’s war against Ukraine, which has escalated into a threat to use nuclear weapons.

The treaty categorically forbids all signatory nations to own, use or threaten to use nuclear weapons.

It went into force in January last year and has been ratified by more than 60 nations and regions.

The conference has been eagerly awaited as an opportunity to counter moves by the nuclear powers to expand their weapons arsenals and continue calls for a world without nuclear weapons.

All U.N. members are qualified to attend. Some have chosen to participate as observers, without having signed or ratified the nuclear ban treaty.

They include Germany and Norway, members of the North Atlantic Treaty Organization, as well as Sweden and Finland, which have announced they plan to join the military alliance.

Participating in discussions for the elimination of nuclear weapons does not conflict with remaining under the U.S. “nuclear umbrella.”

Observer nations intend to focus on long-term goals while dealing with the current Russian threat.

But the Japanese government has not changed its decision to sit out the conference, asserting there is no point in participating without engaging the nuclear powers in the process.

How will the international community regard the absence of Japan at this conference, given that it is the nation most familiar with the horrors that befell Hiroshima and Nagasaki?

We deplore the government’s stance.

Prime Minister Fumio Kishida, elected from Hiroshima, has stressed that background in projecting his political persona. He has appraised the nuclear ban treaty as “an important exit.”

We understand Kishida’s position of stressing the importance of Japan’s alliance with the United States.

But that stance must be all the more reason for him to seek Washington’s understanding and proudly attend the Vienna conference. That, we believe, is what “peace diplomacy” boils down to.

In the meantime, the government has appointed young anti-nuclear activists as “special youth envoys” and is sending them to the conference to convey the horrors of atomic bombing to the world.

Yuta Takahashi, a 21-year-old university student chosen as an envoy, noted: “If the government wants the realities to be widely known, why doesn’t it attend the conference? I sense a huge lack of consistency there.”

We could not agree more.

The day before the start of the meeting, an international conference will be held to discuss the humanitarian impact of nuclear weapons. The government is sending a delegation including two “hibakusha” atomic bomb survivors.

Being held for the fourth time–the last session was eight years ago–the framework of this conference was the foundation upon which the nuclear ban treaty was built.

We hope the delegation will remind the world firmly of the inhumanity of nuclear weapons.

During the Cold War, nuclear weapons were perceived as “the ultimate weapons that cannot be used.”

But since then, they have been reduced in size and become more readily available. Conspicuous moves have been made to lower the hurdle of their deployment. Fears of an accidental nuclear explosion have not evaporated.

How do we reconcile nuclear disarmament and arms control with initiatives for the abolition of nuclear weapons?

It will be a tough challenge, but we must keep striving to reach this goal.