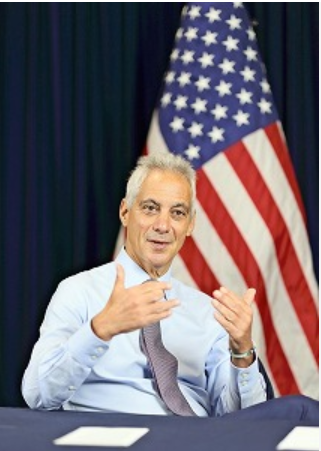 U.S. Ambassador to Japan Rahm Emanuel speaks during an interview.

In an exclusive interview with The Yomiuri Shimbun on Friday, U.S. Ambassador to Japan Rahm Emanuel expressed his view that the partnership between Japan and the United States had entered a new stage of considering “how to project the alliance into a larger domain that is helpful to the alliance” and to other countries in the Indo-Pacific region. The ambassador also emphasized that the Japan-U.S. summit meeting between Prime Minister Fumio Kishida and U.S. President Joe Biden in May had fostered a relationship of trust between the leaders.

This is the second time Emanuel has given an interview to The Yomiuri Shimbun, following one prior to his arrival in Japan.

At a dinner after the summit meeting, the two leaders without affectation called each other by their first names, Joe and Fumio, Emanuel said. And he noted that the relationship of trust between the two will be an invaluable asset when resolving politically difficult issues.

He also revealed that Biden was so impressed with the matcha served by Kishida’s wife Yuko before the dinner that he later sent a message to Kishida and his wife with a bouquet of flowers, expressing his gratitude for the gracious hospitality and the opportunity to experience the rich tradition of the tea ceremony.

Emanuel pointed out that “Beijing took notice” of the recent meeting of the Quad — a framework for cooperation among the four countries of Japan, the United States, Australia and India — and of the U.S.-led Indo-Pacific Economic Framework, which comprises 14 member nations, including Japan. “Beijing hates the fact that there’s alliances, friendships, because it’s isolated,” he added.