Ishikane: Japan must be a bridge for U.N. Security Council members 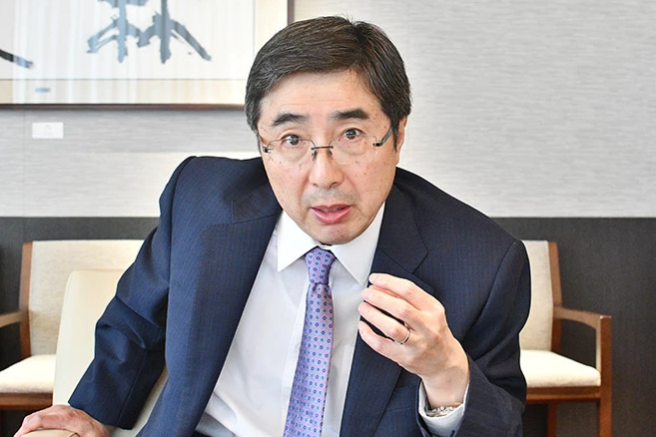 Kimihiro Ishikane, permanent representative of Japan to the United Nations, speaks to The Asahi Shimbun in New York on June 1. (Gakushi Fujiwara)

NEW YORK–Japan’s permanent representative to the United Nations said his nation is looked upon as a unifying force on the often-divided U.N. Security Council, particularly at the present.

“All members feel the council is divided to a great extent,” Kimihiro Ishikane said in a recent interview. “Japan is expected to act as a bridge among the members to maintain unity within the council.”

Japan was elected as a nonpermanent member of the U.N. Security Council on June 9 at the U.N. General Assembly and will serve a two-year term from January 2023.

The U.N. Security Council has been increasingly criticized for being unable to take effective measures regarding Russia’s invasion of Ukraine.

“If people say the council hasn’t been unable to fulfill its role, it’s understandable,” Ishikane said in an interview with The Asahi Shimbun before Japan’s election to the Security Council, regarding how it has dealt with the Ukraine crisis.

However, Ishikane praised how “the council members tried to find common ground” when they voted to call for an emergency special session of the U.N. General Assembly for the first time in 40 years in February over the invasion of Ukraine.

Ishikane became a permanent representative of Japan to the United Nations in November 2019.

The permanent members of the Security Council, including the United States and Britain, have focused on isolating Russia in the international community since its invasion of Ukraine.

However, Ishikane, who regularly exchanges opinions with people such as other countries’ ambassadors, points out that not everyone should assume that every country agrees with isolating Russia.

He said that ambassadors of Asian and African countries who have some dealings with Russia confided in him: “The Western countries have a double standard. They are only keen on solving the Ukraine crisis because it’s occurring in Europe.”

He stressed that one of Japan’s roles in the council is to listen to these Asian and African nations.

The council has held open sessions focused on the Ukraine crisis 22 times since the end of January.

Although the council members haven’t passed a resolution criticizing Russia, three resolutions have been adopted at emergency special sessions of the U.N. General Assembly that do so.

But they have failed to end the conflict, a situation Ishikane describes as “extremely frustrating.”

He said the council still needs to work on resolving the conflict because if the organization becomes less visibly interested in the issue, Russia could take advantage of that for its own gain.

Permanent members of the council such as the United States, Britain and France have often disagreed with the other permanent members, China and Russia, over not only the Ukraine crisis, but also over Syria, the country suffering from the civil war, and North Korea, which has repeatedly fired ballistic missiles.

Although Japan is eager to reform the council, achieving it is difficult in reality.

“Any path toward the council’s reform is not apparent, regrettably,” Ishikane said.

He still said he wants to explore a way to reform the council without revising the U.N. Charter.

Japanese people are especially negative about the United Nations, according to the Pew Research Center in the United States.

The center found that only 41 percent of Japanese had a favorable opinion of the United Nations in 2021, the lowest figure among 14 developed nations.

“Japanese people are increasingly disappointed with the United Nations,” Ishikane said. “This is extremely regrettable, and we are partly responsible for that.”

However, he added that Japan becoming a nonpermanent member should be an opportunity to “share understanding with everyone that it’s the U.N. members who develop the organization and make it useful.”